U.S. Intelligence: Iran Is Not a Threat To U.S.-Led Peace Process In Afghanistan 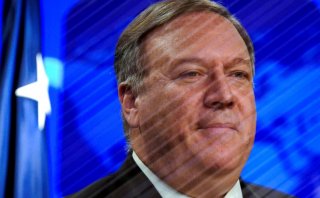 Pompeo had claimed in January that Iran is “actively working to undermine the peace process.” But the Defense Intelligence Agency painted a much different picture for U.S. government investigators supervising the war effort in Afghanistan, claiming that Iranian goals match up with a recent U.S.-Taliban peace deal and downplaying the threat of Iranian-backed forces.

The DIA told the Lead Inspector General in a Tuesday report that Iran has not indicated that it will “actively oppose” the peace accords, which call for the withdrawal of U.S. forces from Afghanistan.

U.S. forces are preparing to leave Afghanistan as part of a peace deal signed in February. U.S. Special Representative Zalmay Khalilzad left for Afghanistan and Qatar on Sunday to push for talks between the Afghan government and Taliban rebels.

The Iranian foreign ministry had said in a March 1 statement that the U.S. government “has no legal standing to sign a peace agreement or to determine the future of Afghanistan,” but also welcomed the withdrawal of U.S. forces.

The DIA told the inspector general that “nothing in Iran’s March statements suggested Iran will actively oppose the deal, because it has previously voiced support for a U.S. withdrawal from the region.”

However, the intelligence agency also acknowledged that Iran has provided “lethal aid” to the Taliban as part of its strategy, even as it has engaged the Afghan government “politically and economically.”

Pompeo had said in January that Iran’s “efforts to support militant groups” in Afghanistan was part of its effort to “to undermine the peace process.”

Iran has also recruited thousands of men from the Hazaras—a predominately Shi’a Muslim ethnic group in Afghanistan—for its war effort in Syria.

The inspector general speculated that returning Hazara fighters “could pose a threat to stability,” but the DIA insisted that these fighters have “not significantly affected the security environment in Afghanistan” and “there are no indications that Iran continues to support the returned fighters, or that Iran intends to keep them organized as a militia in Afghanistan.”

“The lack of Iranian support on the ground, the pro-Afghan government stance of most Hazaras, and the risk of backlash from the Taliban and Afghan government reduce the appeal to Tehran of using these fighters to further their interest in Afghanistan,” the DIA told the inspector general.