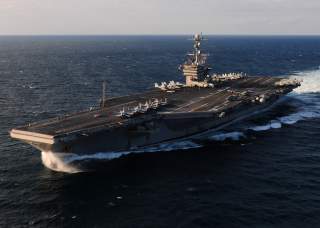 Currently, America taunts China by taking needless risks, provokes Russia with military operations on their border that in no way improves our own security, extends military guarantees to small countries that could drag us into a war we should never fight, and engages in active combat operations in scores of countries where no U.S. security interests are at stake.

Urgent, substantive, and immediate reform in the way we conduct U.S. policy is necessary.

I joined the U.S. Army in the mid-1980s and retired in 2015. During that time, I fought in high-intensity tank-on-tank battles, classic counterinsurgency, trained foreign-military forces, and served during the Cold War. I am also an avid student of military history. I have visited scores of battlefields throughout Europe, Russia, Asia, and the Middle East, and studied battles and wars going back to 400 B.C. One common theme I witnessed is that great powers frequently fell because they came to believe they could not be defeated.

Without question, we have the greatest air force and navy the world has ever known. We are the dominant global power, both militarily and economically. Much of America’s dominance is based on our modern weapons and the technology that empowers them. Our reliance on technology, however, is a double-edged sword.

Should an adversary one day use space-based weapons to strip away our navigation and intelligence satellites, we would suffer a substantial and immediate loss of military capability. Many of our precision weapons would be useless, our ability to navigate on the land, in the air, and on the oceans could be temporarily crippled. Communications would be hampered. Even at the tactical level, much of our ground-combat power is predicated on an ability to disperse units and mass fires—all of which requires uninterrupted ability to communicate across great distances.

We know China and Russia have been working for years to develop the ability to blind, deceive, or destroy U.S. satellites, including ominous developments in Russia. It’s what we don’t know, however, that could prove the most troubling.

Since the latter part of World War II, the U.S. has always been the first to develop new weapons and has always produced the newest generations of follow-on versions to stay ahead of all competition. The history of warfare over thousands of years proves this is a temporary condition.

We must expect that one day another world power is going to develop a new class of weapon or capability that has never been seen which will allow them either neutralize our greatest offensive weapons or against which our best defenses will be inadequate. On that day, we may suddenly discover that the capabilities upon which we have based our nation’s identity are suddenly not as dominant as they have been for the past century. To maintain our position as dominant global power requires two immediate changes.

First, we must recognize there are limits to power. We cannot constantly use or threaten to use military force in an effort to compel our competitors or adversaries to accede to our every preference for what should be obvious reasons: it engenders fear of America and raises incentives for our adversaries to increase research and development of countermeasures.

Second, must preserve our strength. We have spent two decades dissipating our military strength by moving away from a focus on countering potential existential battles by becoming masters of small wars and counterinsurgency warfare.

In the process, we have worn out warfighting equipment, spent trillions in debt to fund inconsequential and unnecessary combat operations, and experienced a real degradation in the conventional combat skills our troops need to counter capable conventional opponents.

Overuse of our military and underdevelopment of their capabilities over the past two decades have eroded our once-overwhelming global military dominance. To reimpose that large gap and increase the overall security of our country, we must better preserve our force, and begin to immediately curtail our active—and largely unnecessary— combat deployments around the globe. Successfully doing so will increase our national security.

Maintaining the status quo, however, will continue the erosion of our strength and increase the chances we may one day suffer outright military defeat.