Is the U.S.-Philippines Alliance Obsolete? 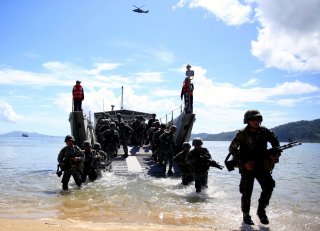 The Mutual Defense Treaty (MDT) between the United States and the Republic of the Philippines, signed on August 30, 1951, strengthened regional security in the decades that followed. More recently, however, the permanency of this defense alliance and the value of a mutual defense treaty with the Philippines have been in question. The Philippines is the “least valuable player” among the thirty-four nations with which the United States has a formal military alliance treaty due to the country’s wavering commitment and underperformance, the United States’ dismal returns on security cooperation efforts, and disproportionate risks assumed by the United States through the MDT.

Effective defense alliances depend on mutual assurances, but the Philippines’ level of commitment has been inconsistent, especially within the last five years. The two countries signed a Visiting Forces Agreement in 1998 and an Enhanced Defense Cooperation Agreement (EDCA) in 2014, authorizing U.S. troop access to military bases in the Philippines through rotational deployments. These agreements enabled activities consistent with the MDT that would promote regional security. Since President Rodrigo Duterte took office in 2016, however, the durability of these agreements—and even the MDT—has wavered. Once in power, Duterte began to distance the Philippines from the United States and gravitate closer to Russia and China. He announced he would end the EDCA, which would, in essence, nullify the MDT by not permitting U.S. troops in Philippine territory or waters. Duterte has since fluctuated back and forth, making this the United States’ most unreliable defense pact. Although the alliance’s fragility became more apparent during Duterte’s tenure, the problem will not disappear when his term ends in 2022: the reluctance to have strong military ties with the United States is linked to perceived historical inequalities in the alliance that will endure beyond current leadership.

The Philippines has underperformed as an ally, especially in terms of burden-sharing for defense costs. Since 2006, when NATO defense ministers “agreed to commit a minimum of two percent of their Gross Domestic Product” (GDP) to defense spending, that metric has often served as an indicator to gauge ally commitment and contributions to collective security. By that criteria, the Philippines (a major non-NATO Ally) ranks 30th among the United States’ thirty-four defense allies with its meager 0.959 percent of GDP dedicated to military expenditures in 2019. As the Center for Strategic & International Studies (CSIS) asserts, however, the two percent threshold is a good indicator of political will among defense allies, but a poor indicator for contributions to U.S. national security because the metric represents a “measure of inputs rather than outputs” and fails to account for factors such as a nation’s economic strength, a factor closely tied to the Philippines’ long-term defense planning. The 1997 Asian financial crisis derailed the original Armed Forces of the Philippines (AFP) Modernization Act implemented in 1995 to guide Philippine Army, Navy, and Air Force modernization through the following fifteen years. Economic conditions again threaten the revised AFP modernization program implemented in 2013 and intended to run through 2028, as coronavirus spurred funds to be redirected from military acquisitions to pandemic response efforts. Though Manila seeks to raise the defense budget and allocate more resources to address security challenges, long-term plans lack durability.

In their study, the CSIS concluded that a “better approach” to assess defense contributions is to “build an array of metrics,” and that while each measurement may offer some, albeit incomplete, insights, they are “strongest when considered together.” The most comprehensive tool to assess U.S. defense dynamics with other countries is the RAND Corporation’s Security Cooperation Prioritization and Propensity Matching Tool. This diagnostic instrument incorporates sixty-six indicators to determine the likelihood for successful U.S. security cooperation efforts, defined as “[a]ll Department of Defense interactions with foreign security establishments to build security relationships that promote specific United States security interests, develop allied and partner nation military and security capabilities for self-defense and multinational operations, and provide United States forces with peacetime and contingency access to allied and partner nations.” This algorithm has consistently ranked the Philippines last among the thirty-four defense allies (based on versions from 2013, 2016, and an author-updated one in 2019).

In the past decade, the United States has granted military aid to the Philippines at rates considerably higher than other allies, even those in geopolitical hot spots. In 2017, this amounted to $61.3 million, compared to $3.4 million for Thailand and around $21 million or less for each of the Baltic States, despite their strategic location and role in deterring Russian hostilities with Europe. Article II of the MDT states that the United States and the Philippines “separately and jointly by self-help and mutual aid will maintain and develop their individual and collective capacity to resist armed attack,” but there is little burden-sharing. Instead, the Philippines remains dependent on the United States to invigorate its armed forces with money and equipment. This massive amount of military aid yields a disproportionately low return on investment. This indicates a mismatch in U.S. security cooperation expenditures, revealing that the Philippines is a high-cost/low-return outlier.

The U.S.-Philippines defense pact has the potential to deter Chinese expansion in the South China Sea—a leading U.S. national security concern—but the Philippines is falling short of U.S. expectations. China’s ongoing sovereignty dispute with the Philippines over the Spratly Islands and Scarborough Shoal—territories with no strategic value—poses an entanglement risk for the United States. Manila interprets the MDT’s scope to include disputed territories, but the United States has avoided taking a position on these sovereignty claims in the South China Sea and has adopted a mutual deterrence policy. Should hostilities arise, however, the National Defense Authorization Act for Fiscal Year 2020 states that an attack against forces, vessels, or aircraft of the Philippines would “trigger the mutual defense obligations of the United States” outlined in Article IV of the MDT.

Concerning this contingency, the Philippines again falls short in its preparations and readiness as a U.S. defense ally. When he spoke on Chinese infringements into Philippine waters, Defense Secretary Delfin Lorenzana stated that Manila has a “very small capability to react to these intrusions.” Manila’s budget for each service perpetuates this lack of readiness, granting over three times more funding to its army than its navy to address internal conflicts, at the expense of maritime capabilities and presence. This puts the United States at greater risk for carrying more than its defense share in any entanglement in Sino-Philippine sovereignty disputes.

Matthew Hughes is a Master of International Public Policy candidate at Johns Hopkins University’s School of Advanced International Studies. The opinions expressed in this article are those of the author alone and do not reflect the official position of the U.S. Army, the Department of Defense, or the U.S. Government. The appearance of hyperlinks does not constitute an endorsement by the U.S. Army, the DoD, or the U.S. Government of the referenced sites or the information, products, or services contained therein.