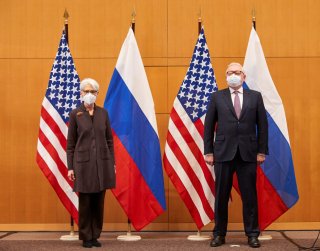 After two months in which another Russian invasion of Ukraine looked probable, if not imminent, there are signs of a diplomatic climbdown from the recent tensions. President Joe Biden has been working the phones in an attempt to defuse the crisis, calling Russian president Vladimir Putin on December 30, where both leaders laid out their expectations for an upcoming series of meetings this week. Biden followed up with a call to Ukrainian president Volodymyr Zelenskyy three days later, where the two reiterated their support for a diplomatic way forward.

Moscow has made it abundantly clear that it expects significant concessions in return for a withdrawal, including a formal, written guarantee that Ukraine will never join NATO and a commitment that the alliance will stop all military drills in states that were part of the Cold War-era Warsaw Pact. Russian deputy foreign minister Sergei Ryabkov, who is leading the Russian delegation, is pressing a hard line, warning the United States that this week’s negotiations could end abruptly if Washington isn’t serious about alleviating Russian demands. Washington, meanwhile, is insistent that many of the items included in Russia’s draft treaty are non-starters. While the United States is willing to discuss mutual limitations on military exercises and missile deployments, Secretary of State Antony Blinken said this Sunday that “we're not looking at troop levels.”

The bilateral U.S.-Russia talks, which concluded today after more than seven hours, marked the beginning of a long and difficult conversation about squaring the circle of what appears to be two competing positions: Russia’s insistence on security assurances in its own neighborhood and the West’s long-held belief that Ukraine should be able to freely choose its foreign partnerships. What is certain, however, is that diplomacy is the only viable course of action for every party in this standoff. Every other option is worse, and some hold the risks of further escalation.

Some U.S. lawmakers are calling on the Biden administration to issue preemptive sanctions on the Russian economy in the hopes it will deter Moscow from launching another invasion of its smaller neighbor. While cutting Russia off from the U.S.-dominated financial system and convincing Germany to stop the controversial Nord Stream 2 pipeline will no doubt have a significant economic impact on Russia, it’s difficult to see how slapping more financial restrictions on Moscow now, regardless of whether it orders a military operation, will persuade the Russian leadership to drop any invasion plans. By shutting down its banking channels and limiting its natural resource exports immediately, Russia loses any incentive it may have to think twice about military action. Nor is it guaranteed to work; Russia, after all, is already the second-most sanctioned country by the United States, even before the latest troop build-up. Moscow, however, isn’t any more willing to withdraw its forces and drop its assistance to the separatists today than it was in 2014.

While senior U.S. officials often like to invoke the phrase “all options are on the table,” this simply isn’t the case with Ukraine. Washington’s options are limited in large part because Ukraine is not a core U.S. security interest. As much as the United States would like the Russians to stop intimidating Kyiv or engaging in military brinksmanship, Washington isn’t going to send American troops to fight and die on the Ukrainian government’s behalf. This is just as well; despite its desire to become a formal NATO member, Ukraine isn’t a member and therefore isn’t covered by NATO’s mutual defense clause. From the standpoint of the United States and many of the European states who have a greater stake in the outcome, the costs of fighting a direct conflict with a nuclear-armed Russia are simply higher than the benefits of defending Ukraine from a Russian attack. Avoiding a war with Moscow is, frankly put, the top priority.

Others advocate for more weapons sales to the Ukrainian army. The logic underlying this proposal is straightforward: the more firepower Kyiv possesses, the more likely Putin would be deterred from ordering a military operation. The United States has provided Ukraine with approximately $2.5 billion in military equipment since 2014, and Congress recently authorized an additional $300 million of such support in the 2022 National Defense Authorization Act.

While it’s possible that a more lethal Ukrainian army would force Moscow to reconsider whether military action would be wise, it’s also possible that Russia could call Washington’s bluff and commit itself to the very invasion the United States and Europe want to prevent. More U.S.-supplied weapons to Ukraine would be unlikely to change the balance of power on the ground as the Russian army is widely expected to best the Ukrainians in any conventional fight. In fact, more military support could ultimately be harmful to Kyiv in the long run. More support would send a misleading political message to the Ukrainian authorities: there is no need for a diplomatic way out of this dispute because the United States will have your back.

In the cut-throat world of international relations, sometimes the best course of action is the one that causes the least amount of harm. In the context of Ukraine and relations with Russia more generally, this means continuing principled dialogue—no matter how exhausting it may be.