The War on Terror and its Opportunity Costs 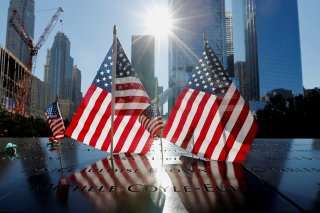 As we pass the twentieth anniversary of the September 11 attacks and mourn the many lives lost on that tragic day and since in the post-9/11 wars, one thing is for certain: the September 11 attacks and the United States’ response to them changed everything. In fact, Americans see it as one of the most impactful events in U.S. history.  However, according to Barbara Slavin, director of the Future of Iran Initiative and a nonresident senior fellow at the Atlantic Council, some of the more profound and often overlooked effects of the War on Terror are on U.S. Foreign Policy, including U.S. relations towards Iran.  On the latest episode of Press The Button, co-host Tom Collina sits down with Barbara Slavin, to discuss implications of the War on Terror on U.S. relations with Iran, and much more.  The podcast begins with a reflection on the War on Terror and how relations could be much different if the United States didn’t declare war on every terrorist group on the planet.

“If you declare war on all your enemies at once you push them together, you create an impossible problem for your strategists,” said Slavin, who is also a lecturer on international affairs at George Washington University. “There are more Jihadi terrorists now than there were twenty years ago. I’m sorry, that’s the definition of failure.”

George W. Bush’s Axis of Evil speech, especially, had negative implications for relations with those countries: North Korea, Iraq, and Iran. Instead of focusing on the Taliban or Al Qaeda,  said Slavin, Bush’s speech “labeled Iran, Iraq, and North Korea as the targets, we’re basically saying ‘we’re going to get you’ to those countries.”

This represented another blow to relations between the United States and Iran.

Iran was useful for the US during the invasions of Iraq and Afghanistan. In fact, Iran provided intelligence during the Afghanistan invasion in order to help oust the Taliban, according to Slavin. The Iranians also provided a great amount of support for the new government of Afghanistan including providing a large number of funds. Even after the “Axis of Evil” speech, backchannel talks continued between the U.S. and Iran. Slavin explains that the U.S. blundered a huge bargaining trip with Iran, when it didn’t turn over MEK terrorists in exchange for Al Qaeda members, “we could have gotten key leaders of all kinds out of the country.”

Turning to the Joint Comprehensive Plan of Action (JCPOA), otherwise known as the Iran Deal, Slavin believes that a deal could have been reached much earlier if relations were not harmed over and over between the two nations.

With the withdrawal of the Trump administration from the Iran deal in 2018, it’s hard for the Iranians to trust that the U.S. won’t pull out again.  The new Raisi administration that was elected in Iran this year is dragging its feet, so she places the chances at “50/50 at best that we get back into the deal”.

Slavin argues that Iran has learned to survive with the maximum pressure campaign the United States has been waging, especially now with economic help from China. Slavin mentions that China took advantage of the War on Terror and kept Iran and many of its neighboring countries afloat during this time. The Iranians have less incentive to enter the deal now that they have learned to live with the sanctions imposed on the country.

The entire interview with Barbara Slavin is available here on Press the Button.