What the Collapse of Afghanistan Means for America’s Future 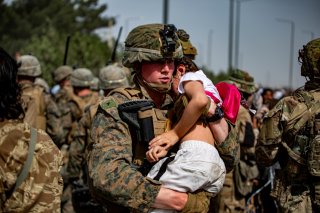 Opponents of the U.S. withdrawal from Afghanistan are using the images of desperate Afghans seeking flights out of the Kabul airport to attack the U.S. decision to leave the decades-long civil war. Nikki Haley, the Trump administration’s former U.S. Ambassador to the United Nations, equated President Joe Biden’s departure from the South Asian nation as a full-blown surrender to the Taliban, as if there was an alternative between getting out of a futile nation-building enterprise and escalating Washington’s role in the conflict. The mainstream media has suggested that the less-than-ideal implementation of the withdrawal should have given the Biden administration pause even though the war in Afghanistan is as unpopular with the American public as it has ever been. “It’s not just an epic defeat for the United States,” Robin Wright, a columnist for the New Yorker, wrote on August 15. “The fall of Kabul may serve as a bookend for the era of U.S. global power.”

But in the midst of the finger-pointing about who is ultimately responsible for Afghanistan’s collapse, arguments used by critics of the withdrawal are receiving a pass. They generally center on three, wobbly legs: that withdrawal will damage Washington’s credibility with allies and adversaries alike; provide China with a golden opportunity to expand its influence in South and Central Asia at the expense of the United States and throw Afghanistan back into the arms of anti-U.S. terrorist groups. There are significant problems with all of them.

The credibility argument is perhaps the most squishy of the three, if only because the concept itself is open to interpretation and may even be broken beyond repair. Ironically, it’s also the most popular with lawmakers, policymakers, and commentators, all of whom lean on credibility whenever a president even considers the option of breaking from the status quo. The logic underlying the credibility thesis as it pertains to Afghanistan is simple, which perhaps explains why it’s so powerful with the foreign policy elite: the decision to withdraw as the Afghan government folds like a house of cards will force U.S. allies in Europe and Asia to question Washington’s commitment and reputation.

Recent history, however, has demonstrated how empty the credibility argument truly is in the confines of international relations. Other countries don’t judge the United States exclusively on past actions or take a one-sizes-fits-all approach to how U.S. leaders may react in the future. This past-action theory of credibility has proven to be bogus, in large part because no two situations or crises are identical—and no two U.S. presidents are identical either. Interests matter and the fact is that maintaining a stable balance of power in Eurasia and ensuring a rising China doesn’t become the indisputable hegemon in Asia are far more important U.S. foreign policy priorities than bailing out an incompetent Afghan government year after year, decade after decade. No foreign leader has the luxury of assuming the U.S. will allow China to swallow up Japan or permit Russia to run roughshod over Europe, for instance, just because President Biden is no longer willing to sacrifice American blood and treasure on behalf of a dysfunctional political elite in Kabul. As Stephen Walt summed up nicely, "Deciding not to continue a futile war for less-than-vital interests tells you absolutely nothing about whether a great power would fight if more serious interests were at stake.”

The second leg of the critique—China as a soon-to-be powerhouse in a post-U.S. Afghanistan—strikes a chord with the U.S. foreign policy elite for understandable reasons. China, the largest economy in the world, is a near-peer competitor to the U.S. and perhaps the only nation on the planet that could realistically challenge Washington’s position in Asia. Concern about Beijing using the U.S. withdrawal to its advantage received an extra boost of adrenaline last weekend when Zhou Bo, a former colonel in the People’s Liberation Army, wrote an op-ed in the New York Times triumphantly claiming that China was “ready to step into the void left by the hasty U.S. retreat.”

Yet to presume China is interested in following Washington's footsteps in Afghanistan and making the same bumbling mistakes would be a significant error in judgment. While it’s undoubtedly true that Chinese officials are relishing the scenes of chaos at the Kabul airport and leveraging the shoddy evacuation of Americans and Afghans for their own propaganda purposes, the Chinese Communist Party isn’t stupid. Yes, Afghanistan possesses as much as $1 trillion in mineral wealth that could theoretically be exploited by the Chinese. But other foreign powers (as well as China itself) have sought to extract those natural resources in the past and have failed to succeed time and time again, running up against everything from insecurity to byzantine bureaucracy. The Taliban’s successes over the last few months notwithstanding, it’s safe to assume the movement will continue to face at least some degree of armed resistance for the foreseeable future (just this weekend, anti-Taliban factions based in the Panjshir Valley retook three districts in the north). China’s top interest in Afghanistan right now is the same as everyone else’s: ensuring the country’s disorder doesn’t spread across its borders.

Indeed, there is a good argument to make that Washington’s departure from Afghanistan isn’t a boon for Beijing at all. For the past two decades, China was able to criticize the United States for contributing to Afghanistan’s insecurity even as it happily watched the U.S. military carry the full weight of the country on its shoulders. Removing U.S. forces has altered the current calculus tremendously for Chinese officials, who no longer have the good fortune of mooching off the U.S. Pacifying Afghanistan (if that’s even possible) will now be the responsibility of China and the rest of the country’s neighbors.

Last but not least, there is a legitimate concern in Washington’s foreign policy circles about Afghanistan returning to what it once was: the world’s preeminent haven for anti-U.S. terrorist groups. This is not an unreasonable fear. CIA Director William Burns testified in April that U.S. counterterrorism operations could prove more difficult without a U.S. forward presence on the ground. CIA Director Leon Panetta was blunter about the matter.

Yet even concerns about terrorism emanating from Afghanistan are overblown. For one, the U.S. intelligence community has made remarkable improvements since the 9/11 terrorist attacks in developing and utilizing the technology to find, track, and neutralize terrorists regardless of where those terrorists may be setting up shop. The U.S. counterterrorism apparatus has gotten so efficient at killing individual terrorists that there is no such thing as a safe haven anymore. To argue that groups like Al Qaeda and Islamic State will now able to flourish unchallenged in a post-U.S. Afghanistan is to vastly underestimate the U.S. intelligence community’s capability.

Could the Taliban and Al Qaeda strengthen their relationship after a U.S. withdrawal? It’s plausible. In fact, the Taliban never really broke their connections with Al-Qaeda in the first place. Even so, just as U.S. officials would be wise to take Taliban promises with many grains of salt, they would also be wise not to assume the Taliban haven’t learned anything over the past two decades. If there was any entity on the planet who got burned from the 9/11 attacks, it was the Taliban, who not only watched their emirate collapse in a matter of months but also had to invest two decades and tens of thousands of casualties to effectively return to the status quo ante. The Taliban have a major self-interest in reigning in Al Qaeda and limiting operations against the United States, assuming of course the group wants to govern Afghanistan for more than a few months.

Nobody is disputing that evacuation operations in Kabul could have gone smoother. But it’s vitally important to separate the implementation of the policy from the policy itself. The case for closing out Washington’s two-decade war in Afghanistan remains as strong today as it was back in April—and no amount of flimsy arguments will change that.