What Do Bill Clinton, George W. Bush, Barack Obama and Donald Trump All Have in Common? 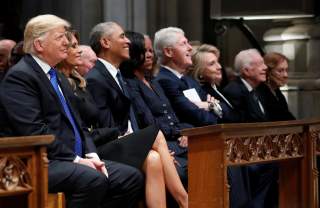 Presidential campaign season can be an altogether exciting, overwhelming, bewildering, and frustrating exercise. It is part popularity contest, part sales-job, with hundreds of millions of ad buys in between.

Candidates on the trail make a lot of promises, commitments, and spending pledges. Some of them are genuine, but a lot of them are baked into an electoral strategy designed to win votes.

Foreign policy isn’t immune to the trend. Those who aspire to be commander in chief have certain ideas about the world, America’s place in it, and when it is appropriate to leverage the world’s finest military on behalf of U.S. national security. The 2020 Democratic presidential primary is one of the more interesting case studies in recent history of candidates jarring with each other on the debate stage about how the United States should conduct itself overseas.

Sens. Bernie Sanders and Elizabeth Warren have been the most dramatic in terms of bucking the foreign policy consensus that has dominated Washington, D.C. for as long as many of us have been alive. Both have promised to completely reorient the pillars on which U.S. foreign policy has stood for decades—U.S. global primacy; runaway military spending; an unchallenged belief in America’s unrivaled capacity and responsibility to do what other nations cannot (or will not). It is a worldview more skeptical of the military option, hostile to the endless military campaigns of the past two decades, and more tolerant of reevaluating Washington’s traditional relationships in places like the Persian Gulf. That a major candidate for president of the United States would articulate these views and make them a central part of their platforms drives the Beltway elite crazy and is smugly dismissed as naive or dangerous.

Others would call these changes overdue and refreshing.

Unfortunately, the American people have heard it all during previous campaigns. Before Warren talked about downsizing an obscenely large defense budget and Sanders passionately argued to distance the U.S. from autocratic governments in the Middle East (Saudi Crown Prince Mohammed Bin Salman has been one of Sanders’ favorite targets, and deservedly so), then-candidate Bill Clinton delivered a speech emphasizing that the United States needed “to shift the burden to a wider coalition of nations, of which our country will still be a leading part.” Nine years later, then-presidential candidate George W. Bush discussed how the United States needed to be a strong but “humble” nation. 16 years after that, speaking at the Center for the National Interest, then-candidate Donald Trump pledged to tear up the failed deals of the previous quarter-century and strike better international agreements for the American people.

Viewed impartially, not a single one of these campaign promises turned out to be the actual policy. Instead of shifting the defense burden, the Clinton administration enlarged the NATO alliance into Central Europe and promoted accession talks for nations in the Baltics, increasing U.S. security commitments in the process. Bush’s humbleness turned into hubris overnight, when the worst terrorist attack in American history transformed the Bush administration’s foreign policy into a hapless crusade for Middle East democracy. Trump’s anger in 2015 and 2016 about wars that sucked up American blood and treasure continue to this day, with the president having deployed 20,000 additional U.S. troops to the Middle East over the last nine months. Even Barack Obama, who was elected in large part on his anti-Iraq war credentials, left office after two terms expanding Washington’s military footprint around the world and using force in more countries than even he likely thought possible.

The point here is not to relitigate the past, but rather to remind people that campaign trail rhetoric is often just that—rhetoric.

Candidates lucky enough to enter the Oval Office frequently discover how difficult it is to enact their agendas. Presidents have to tangle with lawmakers on Capitol Hill who may possess totally different views on what is in the U.S. interest. Elizabeth Warren’s plans to decrease the Pentagon budget, for instance, will run into a buzzsaw in the armed services committees, most of which are staffed with members who are responsible for preserving military facilities in their districts. Others will be overwhelmed in a crisis situation and defer to their military advisers. Still, others will find out how truly difficult it is to swim against the forceful current that the Washington establishment represents; look no further than Donald Trump, who reversed his own military withdrawal in Eastern Syria after receiving fierce condemnation from Republicans and Democrats on the Hill and retired generals on the airwaves.

Bernie Sanders, Elizabeth Warren, or any of the Democratic presidential candidates still in the race could very well be the exception to the rule—assuming, of course, the Democratic candidate wins this year. But the odds are often stacked against them. It will take perseverance and bull-headedness from the commander in chief and a devoted support team to shift U.S. foreign policy in a more reasonable direction. Otherwise, the Beltway will devour them like it has devoured countless presidents in the past.