What is the Point of a Forever War in Iraq? 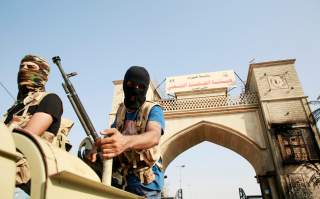 Basra, Iraq, was once the “Venice of the East,” a beautiful city of canals near the Persian Gulf. But on September 7, it was beleaguered by angry protests, some of which turned violent and left more than a dozen people dead before some measure of calm returned two days later.

The protesters’ grievances are many. Their province contains 70 percent of Iraq’s oil reserves, but 50 percent of the city lives in extreme poverty. Unemployment is high, corruption is rampant the in local government, and basic needs like consistent electricity—a must when temperatures regularly top 100—and clean tap water are going unmet.

The demonstrators set buildings ablaze, burning public offices and political party headquarters. The American diplomatic building at the Basra airport was targeted by rockets but ultimately not damaged. (Also, contrary to a statement from White House Press Secretary Sarah Huckabee Sanders, Iran was not responsible for this attack on U.S. facilities—protesters also burned the Iranian consulate, chanting, “Iran out!”) “The U.S. and Iran support rival Iraqi political groupings in a high-stakes battle to form a government after the May election threw up no clear winner,” The Wall Street Journal reports, and the protests in Basra suggest the people of Iraq don’t appreciate either nation’s interference in their affairs.

The turmoil in Basra may be unsurprising given the living conditions locals face, but it should also be instructive. This is what regime change, fifteen years of intervention, occupation, and reconstruction in Iraq has wrought. This is what trillions of dollars borrowed and spent—and tens of thousands of American and Iraqi lives extinguished—have purchased.

The protests in Basra are just one moment of ongoing political turmoil in Iraq, with all the security risks and human suffering that entails. They are an indictment in microcosm of Washington’s failed reliance on military intervention and nation-building as a panacea to local political problems in distant lands that don’t threaten America’s security, prosperity, or way of life.

In Basra and Iraq more generally, Americans are presented with years of evidence that U.S. military intervention has failed to achieve strategically important, sustainable outcomes despite Washington’s best efforts. “Some might argue that trying harder, investing more billions, sending yet more equipment for perhaps another 15 years will produce more favorable results,” says military historian Ret. Col. Andrew Bacevich, but this is “a mug’s game.” There is nothing available to America in Iraq that might fairly be called a military victory, and repeating the mistakes of the past will not end differently the umpteenth time around.

For Washington, observing the chaos in Basra should be one more impetus of many to seek a drastic change in American foreign policy, reorienting to focus strictly on the defense of vital U.S. interests, narrowly defined. This agenda may not be familiar in Washington, but it does reflect what most Americans want. Indeed, “to the extent that we can read the views of the American public, more of them than not wanted out of Iraq when President Obama was elected,” notes MIT’s Barry Posen at Politico. They wanted the same thing when President Trump was elected—in fact, both men’s repudiation of the war in Iraq was key to their campaign success.

“Aside from the arguments of restraint advocates that [more] military efforts in Iraq are neither necessary nor wise, we should also consider whether they would be consistent with the democratically expressed views of the American people,” Posen continues. “Odd indeed to repudiate the product of democracy at home to pursue a futile quest to achieve it in a divided and violent society abroad.”

Americans are right to want more prudent, realistic foreign policy. Such a policy would not sacrifice U.S. blood and treasure on wars intended to spread democracy and reorder societies rather than focus on defending Americans. It would not attempt to impose an external military solution on the internal political problems of other nations. It would not burden America’s military with tasks for which it is not designed and to which it is not suited. It would not contribute to regional instability across the Middle East. The persistent hardships that resulted in the people of Basra marching this past week are difficult challenges—but they are Iraqi, not American, challenges.

Those hardships would not disappear in the absence of U.S. military intervention, of course. But neither are they disappearing in its presence, and it is past time to chart a new course in Iraq.

Bonnie Kristian is a fellow at Defense Priorities and weekend editor at The Week. Her writing has also appeared at Time Magazine, CNN, Politico, USA Today, Relevant Magazine, The Hill, and The American Conservative, among other outlets.