What a Volodymyr Zelensky Ukrainian Presidency Would Look Like 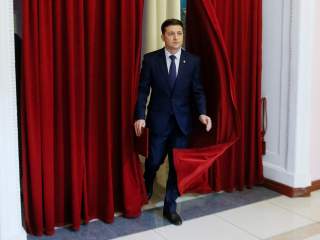 Economic growth will be critical, and for that Ukraine needs to draw in more international investment. Bakanov observed that “people need to be comfortable to go into business.” They need to simplify the process of getting licenses,” especially for the extraction of natural resources. We “need to fight regulations, to take away obstacles to business. Then it will be profitable and comfortable to do business.”

Moreover, the campaign is developing a “package of reforms to simplify investment decisions and development of small business.” The new government also will pursue tax reform. Bakanov suggested moving from taxing profits to taxing assets. Money laundering penalties also should be addressed because although existing regulations are overly stringent in theory, they are never imposed in practice.

He hopes such reforms will “promote energy security for our country.” He pointed to the United States, which has greatly benefited from fracking, as a model for Ukraine which remains highly dependent on Russia. “If we were able to make the energy sector more efficient, we could be competitive.” He cited the possibility of developing nuclear power, since “lots of uranium can be extracted.” Of course, in this “international cooperation would be very helpful.”

While in America, Bakanov and his colleagues also have been meeting with members of the Ukrainian diaspora, which has been actively involved in Ukraine’s development. Bakanov noted that building bridges is particularly important since Zelensky had been “to some extent the victim” of unfair attacks, such as being “called an agent of the Kremlin.” So far, Bakanov believed his contacts with the diaspora have been “very positive.”

Ukraine has suffered much throughout its history, during its long domination by stronger empires as well as short-lived moments of independence. The Ukrainian people apparently are prepared to put their hopes in an untested actor, Volodymyr Zelensky. To cynical observers of Ukrainian politics, Zelensky looks like a political ingenue about to face the lions.

However, Ukrainians won’t be jumping into the unknown: the former actor Ronald Reagan entered the presidency (after being first elected California governor at age fifty-five) without much international experience. Then he ably presided over the waning days of the Cold War and encouraged the peaceful dissolution of the Soviet Union.

Maybe a young Ukrainian comic will equally confound the skeptics. Bakanov insisted that “Our campaign is very simply for the people and about the people.” Ukrainians deserve to have leaders who finally put their people’s interests first.

Doug Bandow is a Senior Fellow at the Cato Institute. He is a former Special Assistant to President Ronald Reagan and the author of several books, including Foreign Follies: America’s New Global Empire.