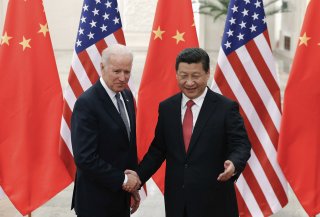 President-elect Joe Biden is “not going to make any immediate moves” with regards to China, he told the New York Times in a recent interview. “[A]nd the same applies to the tariffs,” Biden continued, referring to the heavy taxes paid by U.S. consumers on Chinese imports as part of President Donald Trump’s trade war. “I’m not going to prejudice my options.”

What options might Joe Biden want to pursue with China? Biden has styled himself on the campaign trail as a diplomatic internationalist whose foreign policy would avoid the military boondoggles of the last two decades. It’s notable that Biden and Trump have jostled for the title of biggest hawk when it comes to U.S.-China relations. In fact, retaining Trump’s aggressive and counterproductive trade policies is among the options that Biden is considering. But that would be an inauspicious start to the next four years of engagement with Beijing.

In the New York Times interview, as he has throughout his campaign, Biden kept his plans for China vague. He wants to “develop a coherent strategy,” he said, and the “best China strategy, I think, is one which gets every one of our—or at least what used to be our—allies on the same page.”

Biden’s interviewer, New York Times opinion columnist Thomas Friedman, added his interpretation that being on the same page means “galvaniz[ing] a global coalition against” Beijing. That’s not a strained reading given what else Biden said: He sketched a hardline trade policy which will keep at least some of Trump’s trade agreements intact. He explained as well that he wants more “leverage” against Beijing, linking this to domestic industrial and research policy.

Does “leverage” also mean military might? Biden’s reported consideration of Michèle Flournoy for defense secretary—a choice yet unmade, but receiving new support from Democratic lawmakers—is one reason to think the answer may be “yes.”

Flournoy takes an adversarial approach to China, arguing we need further military build-up to ensure China does not attack us. She wrote in Foreign Affairs this past summer when her place in Biden’s then-hypothetical administration was widely assumed, that Washington should “deploy more senior officials and additional military forces to [Asia], to underscore [Washington’s] enduring presence” there. The United States should conduct enough military exercises in China’s neighborhood, she said, to be able “to credibly threaten to sink all of China’s military vessels, submarines, and merchant ships in the South China Sea within 72 hours.”

Flournoy’s perspective isn’t the only indicator of where Biden is likely heading with China. His secretary of state nominee, Antony Blinken, in May endorsed sanctioning China for its authoritarianism in Hong Kong. Incoming National Security Adviser Jake Sullivan has called for “devoting more assets and resources to ensuring and reinforcing, and holding up alongside our partners, the freedom of navigation in the South China Sea,” which probably means military build-up. And Biden himself has said he will “pressure, isolate and punish China” in concert with U.S. allies.

This is not to say the Biden administration is moving toward a policy of pure antagonism toward China, or that Biden will simply pick up where Trump left off. Biden will be more consistent in his messaging than Trump has been. He won’t talk about his “love” for Chinese President-for-life Xi Jinping, as Trump bizarrely did. He won’t give tacit approval to Xi’s genocidal policies behind closed doors, as Trump allegedly did.

Flournoy notes that there are many issues on which “we have to deal with China as a partner or we cannot solve the problem,” which is a far more realistic view than Trump’s ramblings about “cut[ting] off the whole relationship.” Diplomacy will probably stabilize: Blinken says he aims to stop “veering back and forth between confrontation and abdication” with China. Meanwhile, Sullivan has criticized Washington’s habit of giving China unrealistic, maximalist ultimatums, which Beijing ignores because they’re not important enough to U.S. interests to justify military enforcement. Also, Biden recognizes the United States will have to “cooperate with Beijing on issues where our interests converge.”

The challenge for Biden and his still-assembling team, then, will be to heed their own best advice.

Dictating Beijing’s governance of Hong Kong or curtailing China’s already-limited maritime power in its near abroad, for example, is likely the sort of unrealistic, maximalist dictate Sullivan rightly warns against. Both Biden and Flournoy acknowledge that the need for cooperation (which also includes the more mundane engagement two enormous, entwined economies entail) requires treating China as a rival, not an enemy.

That doesn’t mean dissembling in the face of Beijing’s totalitarianism and abuses. But it does mean proactively keeping the peace, deliberately reducing opportunities to stumble into a conflict between the world’s two most powerful militaries, and fostering mutually beneficial trade.

Nixing those Trump tariffs would be a good place to start.