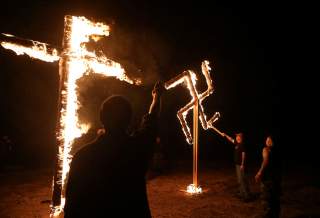 Tucker Carlson, America’s most prominent journalist, went further than most this week in the wake of twin national tragedies. White supremacy is a “hoax,” the Fox star said, the heir in spirit to the discredited Russia collusion story.

“It’s actually not a real problem in America,” said Carlson. “The combined membership of every white supremacist organization in this country would be able to fit inside of a college football stadium… It’s a conspiracy theory used to divide the country and keep a hold on power.”

Carlson went much further than President Donald Trump, newly embattled for alleged associations with the racist fringe, in that he denied there’s actually a broader sociological problem, outside a murderous few. “In one voice, our nation must condemn racism, bigotry, and white supremacy,” the president said in an official statement this week at the White House. “These sinister ideologies must be defeated. Hate has no place in America. Hatred warps the mind, ravages the heart, and devours the soul. We have asked the FBI to identify all further resources they need to investigate and disrupt hate crimes and domestic terrorism — whatever they need.”

It’s the latter point on which the post-El Paso future will be litigated. Anxiety surrounding the dwindling prestige and power of white Americans permeates U.S. politics. Demographic trends combined with unforgiving inequality, ceaseless immigration and ubiquitous technology are helping create a narrative of disrepair, of anomie, in segments of society. Disdain on the Left for “deplorables” and the like has only further helped fuel a sense of resentment and alienation. The columnist Janan Ganesh avers in the Financial Times that America “should not give into the pessimism of white nationalism.”

Yet there is a danger of overreaction. Should America confront its fringes with the wrath it brought to the Middle East after September 11, 2001? Senators Cory Booker and Richard Durbin are demanding that the FBI and Justice Department deploy the same kind of resources that they devoted to battling global terrorism to stopping white nationalism. In the Daily Beast, Christopher Dickey argues that it should: “Now, before it grows any stronger, should be the time to move against it with the same kind of concerted international focus of attention and resources that were trained on Osama bin Laden. Now is the time for a global war on white nationalist terrorism.”

But two decades of evidence argues against changing the whole way we do business in the face of a few fanatics. America is a violent, perhaps unhappy, country, to be sure. But as Ganesh notes: “If a person in 1945 were given sight of the west in 2019, what would strike them — the social dislocation brought about by racial variety or, actually, how little of it there has been given the scale of the change?”

What would a “war on white nationalism” actually entail? Will it be a decades-long slog, this time on American soil? Will it feature the mistakes of the war or terror? “It says something about the bankruptcy of our pundits and their hatred for one another that both sides are trying to sic a War on Terror on each other,” said Justin Logan of the Center for the Study of Statesmanship. Writing in the Atlantic, Max Abrahms, too, sounds a cautionary note. According to him, “As a term, extremism is used sloppily to denote both a person’s political goals and the methods used to achieve them. There’s an important difference, though, between rooting for extreme ends and using extreme means to realize them. Chat rooms are full of people expressing sundry offensive—even reprehensible—political visions. The smart counterterrorist swallows hard and leaves them alone. But it’s interdiction time the moment the prospect of violence is even mentioned as a way forward.”

“Every serious attempt to measure our response to terrorism from a cost-benefit perspective shows that it has been an extreme and ridiculous overreaction,” says Richard Hanania of Columbia University, whose work on terrorism and foreign policy is drawing increased attention this week. “The costs of the Iraq and Afghanistan wars, in terms of blood and treasure, dwarfed those of the 9/11 attacks themselves, and the number of worldwide terrorist attacks actually increased due to our policies.” Before it embarks upon a new, ill-considered crusade, America should contemplate the costs and consequences of its last war on terror.