The WHO's Relationship with China Has Become the Ultimate Left vs. Right Media War 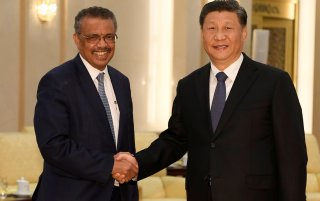 A vigorous media war is taking place over whether to blame both China and the World Health Organization (WHO) for the spread of the coronavirus and the global tragedy it has spawned. Conservative outlets direct their fire at both targets and specifically defend President Trump’s decision to cut-off new funding for the WHO. Centrist and liberal journalists attempt to rebut criticisms of the WHO, and they argue that the need for continued funding and the international cooperation the WHO embodies is more urgent than ever before, given the severity of the current global pandemic. It is an increasingly awkward position, though, because the WHO’s advocates face the task of defending the organization without appearing to defend its cozy connections to China’s communist regime.

That balancing act is especially difficult in the United States, given the surge of public opinion blaming Beijing for the spread of the virus.  A new Harris poll finds that 77 percent of Americans hold the Chinese government responsible. Moreover, there is widespread bipartisan agreement on that issue. The increasingly prominent narrative is that not only did the pandemic originate in China, but that Chinese officials withheld key information for weeks that could have enabled other countries to adopt measures impeding the spread of the deadly virus.  In late March, more than a month after the crisis erupted, Secretary of State Mike Pompeo charged that China’s government was still withholding important information.

Conservative outlets are especially determined to promote allegations about Beijing’s lack of transparency, with Fox News commentators leading the charge. But even some centrist and liberal publications have begun to feature articles accusing China’s government of “deceptive practices” and placing primary blame for the pandemic on Xi Jinping’s regime.

A growing number of critics also blast the WHO for being utterly subservient to Beijing.  The Wall Street Journal’s editorial board stated bluntly that the WHO’s “bows to Beijing” had severely damaged the international response to the virus.  Other conservative publications echoed those accusations. Essentially, they accuse the WHO of being Communist China’s willing accomplice, or at least its enabler.

Two allegations are especially prominent. The first is that WHO officials reflexively repeated Beijing’s misleading positions about the nature and spread of the virus, and WHO statements were so positive about China’s performance in containing the spread that those statements amounted to fawning.  The other complaint is that the WHO had obediently done Beijing’s bidding and excluded Taiwan from participating in collective efforts to stem the spread of the virus, even though Taipei had been remarkably successful in its own containment efforts.  As with other coronavirus issues, some of those criticisms are spreading beyond the usual conservative publications into moderate and even left-of-center ones.

Nevertheless, most media reactions to President Trump’s April 14 decision to cut-off new funding to the WHO tended to follow ideological lines, as did the reaction in Congress. Conservative, anti-China publications generally praised the president’s action.  Most liberals predictably criticized the move as excessive and counterproductive. It was notable, though, that few in the latter faction defended the WHO’s relationship with China as part of rationale for opposing Trump’s edict. One attempt to fully exonerate the WHO and at least partially exonerate China, was a New York Times article by Richard Perez-Pena and Donald G. McNeil Jr.

Most WHO defenders, though, diligently have sought to separate the two issues. Writing in The Hill, international consultant K. Riva Levinson, made the distinction emphatically, saying “the WHO made mistakes, but it’s China that must be held accountable.” A few have gone even further, raising doubts about the wisdom of Trump’s funding cutoff, but still acknowledging that the WHO, as well as China, had not handled information about the coronavirus outbreak well at all.

In contrast to the defensive posture of most WHO supporters, proponents of the funding cut-off usually stress the China angle in their attacks on the WHO. Gordon G. Chang, a long-time basher of the communist regime, asserted that Trump was right to end funding because of the organization’s collaboration in Beijing’s disinformation program and its exclusion of Taiwan. Libertarians have joined with conservatives in attacking the WHO for its China connection. An article by one critic in the flagship libertarian publication Reason magazine contended that the WHO “helped spread Chinese lies about COVUD-19.”

Despite the attempts by establishment media outlets to finesse the problem of the WHO’s relationship with China, that task is likely to get more difficult, not less, going forward. The extent of public hostility in the U.S. toward the Chinese government generally, and its role regarding the coronavirus pandemic in particular, will make expressing that position increasingly hazardous for journalistic reputations. Anti-China and anti-WHO forces smell blood, and they’re not about to cease their attacks on either target.