Why America Can't Afford to 'Take the Oil' 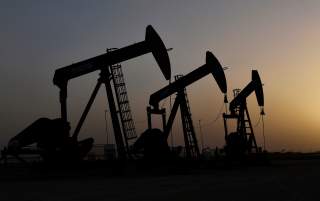 Many of Washington’s foreign-policy elite—members of Congress, retired generals and admirals, and think tank professionals—are strident in their contention that the recent attack against Saudi Arabia’s oil refineries warrants a strong military response from the United States. Before Beltway elites plunge the United States into yet another open-ended war in the Middle East, however, we should consider the ramifications of such an escalation. Heedlessly rushing to use force would worsen our security significantly—it would certainly not improve it.

The vast majority of today’s senior political leaders and all of the active and retired three- and four-star generals spent their formative years in the kiln of the Cold War. Though that world came crashing down in 1992 with the dissolution of the Soviet Union, too many of these figures still form their policies as though that now-defunct paradigm remains. But this paradigm doesn’t exist and hasn’t existed for decades, which means policymaking on this outdated model puts U.S. interests at risk.

In response to the oil shocks of the 1970s and the USSR’s invasion of Afghanistan on Christmas Day in 1979, then-President Jimmy Carter formed the “Carter Doctrine” to safeguard American interests. In his 1980 State of the Union address, Carter established the foundation of that doctrine when he solemnly said, “any attempt by any outside force to gain control of the Persian Gulf region will be regarded as an assault on the vital interests of the United States of America, and such an assault will be repelled by any means necessary, including military force.” Every administration, of both parties, has embraced this doctrine since.

When Carter made the speech, America’s economy was far more vulnerable than it is today to sudden disruptions of Saudi oil, as we then imported 1.5 million barrels of oil per day (mbd) from the Kingdom. That is no longer the case. As of this summer, our Saudi oil imports are down 66 percent to a paltry 0.5 mbd. Meanwhile, our domestic production has risen to a robust 12.4 mbd, making America the world’s biggest oil producer. That shift has significantly reduced U.S. dependence on foreign oil. Without question, then, America’s interests are no longer as vulnerable to negative events in the Middle East as they were in 1980. Its posture and policies should adjust for these new realities, but they haven’t. In fact, America is actually more engaged in the Middle East even though its interests in the region are diminishing by the day.

There are currently 43,800 U.S. troops stationed throughout the Middle East. Including the 14,000 in Afghanistan—and as many as 2,000 in Syria—the total number of combat troops stationed in the region is pushing 60,000. That is a staggering number and expense when one considers the region is demonstrably less critical to our security than it was in years past.

This current crisis between Saudi Arabia and Iran illustrates the unnecessary risk to U.S. security and prosperity that such outdated thinking incurs. It should push Washington to adjust U.S. policies based on strategic realities and reallocate our defense resources accordingly.

If Washington bowed to pressure from Riyadh and attacked Iran in retaliation for the strike against the Kingdom’s oil refineries, then there is a high probability that it could be drawn into an all-out war. Iran has promised exactly that. There is much to lose for America in that scenario. Another war in the Middle East will further weaken the United States, as our “endless wars” have, costing trillions of dollars, thousands of lives, and tens of thousands of casualties (not to mention local civilians). It is not surprising that other nations want the U.S. military to wage fights on their behalf—but it is appalling that Washington continues risking our soldiers’ lives for Middle Eastern security.

India, for example, imports an astounding 83 percent of its oil, and the majority of it comes from the Middle East. China is also critically dependent on imported oil, mainly from Saudi Arabia. Why should America’s sons and daughters risk their lives for the benefit of Riyadh’s economic interests? Why should they be put at risk for Riyadh’s first and third biggest customers, China and India? Why should we fight this battle while Beijing and New Delhi take no risks and spend no money to secure the free flow of oil?

War is not the only option. If we reset our relations with Saudi Arabia specifically—and the Middle East generally—it will force regional powers to take responsibility for their own interests. A stable balance of power can resume, which served the U.S. and global economy well for decades. It is time for America to stop underwriting other countries’ security in the Middle East, especially at risk of war. It’s time for their free-ride to end.