Why Americans Want a President Who Ends Endless Wars 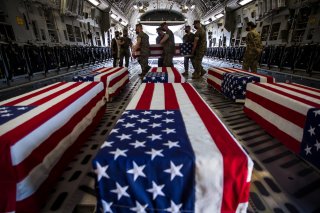 The United States has been an active military player around the globe since the end of the Cold War. It has fought bloody and expensive wars in Iraq and Afghanistan while also conducting significant military operations in the Balkans, Libya, Syria, and other hot spots in the Middle East and North Africa.

The election of Donald Trump and the significant support garnered by Bernie Sanders and Elizabeth Warren in the Democrat primary suggests that Americans have become weary of this heavy burden. These elected officials prominently called for new thinking about America’s role in the world and benefited from it.

A new YouGov poll commissioned by the Charles Koch Institute provides further evidence that the American public supports a more realist foreign policy and wants its leaders to focus more on pressing domestic needs than overseas projects. YouGov interviewed two thousand people from July 24–27, 2020, and compiled the poll data based on their responses. Given how polarized the country is on so many other issues, it is particularly striking how unified Americans are in ending our endless wars in the Middle East and avoiding greater military entanglement in conflicts overseas.

Focus on Challenges at Home

America’s realist turn is especially notable in how the public is thinking about our long-standing wars in Iraq and Afghanistan. About 74 percent of Americans support bringing U.S. troops home from Iraq with only 11 percent opposing such a move. Support for military withdrawal from Afghanistan is even higher, with 76 percent of Americans favoring bringing U.S. troops home from Afghanistan and only 10 percent opposing withdrawal. Nearly half of Americans “strongly support” withdrawing troops from that country, suggesting that President Trump and Ambassador Zalmay Khalilzad have the political winds at their back in their efforts to end this endless war.

Americans are more divided about U.S. troop levels in Europe. About the same number of Americans think we should decrease the number of U.S. troops stationed in Europe (36 percent) as want to keep troops levels the same (40 percent). Only 4 percent want to increase American force levels. Regardless of the number of troops they think we should keep in Europe, nearly a majority (47 percent) of Americans see NATO as less relevant to today’s world compared to 70 years ago with only 29 percent seeing it as more relevant. This reflects a recognition of the significant changes from the end of the Cold War.

The theme of a fairly realist public is also seen in their response to questions regarding China. Over half of the public thinks that China is a military threat to the United States with less than a quarter saying it isn’t. This is not surprising given that China is the most powerful country in the world other than the United States and is relatively more important than any other adversary. However, Americans don’t seem eager to get into a military fight with China either. About 62 percent of respondents said that the United States shouldn’t intervene militarily in a war between China and India with only 12 percent favoring American military defense of India and only 3 percent saying we should defend China. If China blockaded Taiwan, only 27 percent said we should use military force to break the blockade while 39 percent said the United States should not use military force to break the blockade. In the case of a Chinese invasion of Taiwan, Americans are split. About 36 percent oppose using military force to protect Taiwan, 30 percent favor using military force, and 35 percent don’t know.

Consistent with their concerns about domestic priorities, a plurality (37 percent) of Americans want to see Pentagon spending decrease. About 28 percent want to keep it the same and only 13 percent want spending to increase. When respondents were reminded the national debt is over $23 trillion dollars and rising above $25 trillion this year, half (49 percent) of all Americans wanted to decrease Pentagon spending while only 8 percent wanted to see it increased. Republicans, in particular, were impacted by concerns around the national debt. Their support for cutting defense spending grew from 13 percent to 40 percent when provided this context.

When it comes to American public opinion on key U.S. foreign policy issues today, it is clear the public supports ending our current wars while not getting into new ones and focusing on domestic priorities. Current and future policymakers would be wise to take into account the increasingly realist and restrained views of the American people when determining our nation’s path in the world.

Dr. William Ruger is vice president of policy and research at the Charles Koch Institute. He is also a veteran of the Afghanistan War.