Why Are U.S. Lawmakers Interested in This American Tourist’s Russian Court Case? 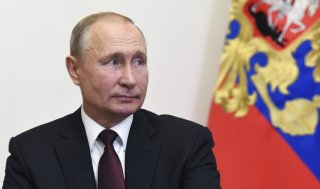 The U.S. Department of State expressed outrage on Monday after a Russian court sentenced U.S. citizen Paul Whelan to 16 years in prison for espionage, as several lawmakers vowed to keep fighting for his release.

Whelan, a retired U.S. Marine, was arrested in December 2018 at a Moscow hotel while attending a wedding. Russian foreign minister Sergei Lavrov said that he was “caught red handed,” but Whelan and his lawyers maintain that he was framed by state security.

Russian officials and Whelan’s lawyers have floated the possibility that Whelan could be released as part of a prisoner exchange. Whelan is also a Canadian, British, and Irish citizen.

“The United States is outraged by the decision of a Russian court today to convict U.S. citizen Paul Whelan after a secret trial, with secret evidence, and without appropriate allowances for defense witnesses,” Secretary of State Mike Pompeo said in a statement. “The treatment of Paul Whelan at the hands of Russian authorities has been appalling.”

Members of Congress have taken an interest in securing his release.

“Despite months of harsh and cruel treatment, we remain steadfast in our commitment to working with the Whelan family to end this nightmare,” the statement declared. “Mr. Whelan should not continue to be held as a political prisoner, and he should be allowed to return home to his family in Michigan immediately.”

The delegation also claimed that Whelan was threatened by guards, and kept from speaking to his family, and “denied necessary medical care until his condition required a life-saving emergency surgery.”

“With this expected yet outrageous verdict, Vladimir Putin's ‘justice’ system is imprisoning a falsely accused American on trumped up charges and for political reasons,” he said in a statement of his own. “To be clear, the end of the trial does not mark the end of our fight for Paul Whelan’s freedom.”

Russian officials had previously talked about exchanging an American for Yaroshenko, who has “close ties with Russian special services.”

The last major U.S.-Russian prisoner exchange took place in 2010, when Russia traded convicted spies with the United States and Britain.

One of the prisoners released to Britain, Sergei Skripal, was later poisoned in a suspected attack by Russian intelligence.

The United States and Iran also concluded a prisoner swap earlier in June, trading an American convicted of political crimes for an Iranian-American accused of smuggling medical technology.