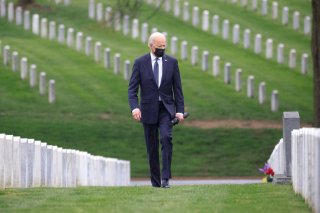 In 1972, a scribble on a private memo on the Vietnam War described President Richard Nixon’s private assessment for ten years of American air superiority in South East Asia: “The result = Zilch.” Fast forward to 2020, and Afghanistan offers a painful renewal of the American tradition for military entanglement. And similar to Vietnam, growing acceptance of Afghanistan as a failure of post-9/11 maximalist policy has generally permutated amongst confused American voters, costing taxpayers over $2 trillion—or fifteen times the total cost of the Marshall plan to rebuild post-WWII Europe. Costs continue to mount, lives continue to be lost, and a gradual, steeping reaction of Afghan culture against American presence is increasingly evident. As a consequence, the Biden administration must respect the Doha agreement and withdraw from Afghanistan immediately.

The opening moves of Afghanistan were hardly a grand stroke of American hard power, instead being run largely by CIA operatives and special forces, with the objective of seizing the capital and forcing the Taliban to surrender Al Qaeda operatives—namely Osama bin Laden. While American operatives would eventually succeed in doing both (albeit with bin Laden only much later), advisors to the president didn’t know what to do next, and simply raised the numbers of American troops to 25,000. “I have no visibility into who the bad guys are in Afghanistan,” quipped Donald Rumsfeld—George W. Bush’s secretary of defense—in a 2003 memo. These words of indirection would offer a painful respite to General William Westmoreland’s dissent to Lyndon Johnson on the Vietnam war: “Most Americans do not know how we got where we are, and most… are convinced that somehow we should not have gotten this deeply in.” Rumsfeld’s own personal 2002 memo would close on an equally disturbing but introspective note: “Help!” Rumsfeld's plea, of course, would fall on deaf ears, with Barack Obama responding to the crisis by raising the number of troops to 100,000 by 2010.

Since 2003, the situation has grown helplessly more frustrating, with the Washington Post leaking the 2019 “Afghanistan papers” offering blunt insights of self-delusion in the American foreign policy calculus. “Every data point was altered to present the best picture possible… everything we were doing was right and we became a self-licking ice cream cone,” explained Bob Crowley, adviser to U.S. military commanders from 2013-14. The people of Afghanistan have become similarly dismayed at the inactive American occupation, with the Taliban now governing nearly 70 percent of the country. In layman’s terms: “The result = Zilch.”

To view the failure of American foreign policy as a lack of articulable objectives is only part of the equation. For Alexander George and other scholars, a policy of successful coercive diplomacy—that is, a method short of military escalation—includes factors such as a sense of urgency, the clarity of objectives, and preciseness of settlement terms. Doing so, George argues, minimizes the political and economic resources needed to resolve a crisis.

These terms are bleak for Afghanistan; besides the obvious problem of clarity, American policy lacks any consistent settlement terms with the Taliban. While under the 2020 Doha agreement the Trump administration promised to withdraw by May 1, the Biden administration has already signaled it does not intend to adhere to all the terms. Indeed, National Security Advisor Jake Sullivan has already assured Afghan allies that the United States will “assess whether the Taliban was living up to its commitments to cut ties with terrorist groups,” a promise that already seems to be self-fulfilled given the findings of terrorist affiliations by the Congressional Afghanistan Study Group (ASG). With the terms obfuscated at best, a tangible settlement seems improbable.

Even if the abstract ideas of peace were coherent, the tools available to the Biden administration lack both pragmatic use and long-term sustainability. For example, Joe Biden could attempt to incentivize further concessions by “turning the screw,” effectively implementing a gradually more painful set of sanctions followed by targeted drone strikes. But given the Taliban thrives on an already $200 million illegal opium trade, sanction busting remains probable. Moreover, even if one was to accept that sanctions would hurt the Taliban (studies suggest they would not), the legitimate government of Kabul would likely face massive price increases of up to 65 percent as it did with earlier UN sanctions, allowing the Taliban to rent-seek remaining resources.  Biden could also attempt to use drone strikes to target Taliban leadership and strategic zones; but doing so, similar to Trump and Obama’s attempts, would yield little against the asymmetric insurgency, as suggested by a U.S. Army War College Report.  The failure of drone strikes to meaningfully inflict harm, Daniel Byman et al. warns, could have the opposite effect, entrenching Taliban intentions for escalated military conflict.

Alternatively, policymakers could attempt to completely throw out Geroge's coercive diplomacy playbook and reoccupy Afghanistan. But given that the limited number of forces currently present are already opposed by a growing bipartisan consensus, a massive stabilization effort comparable to Bush’s 2007 troop surge would likely meet fierce competition in Congress. Biden himself, additionally, has spoken of maintaining only a small counterterrorism force. Moreover, as Todd Greentree, a political advisor with the United States in Afghanistan between 2008 to 2012 explains, doing so would repeat the very cause for failure: an err in input legitimacy (that is, failing to allow the people of Afghanistan to have a voice in policy). More specifically, in December of 2001, the United States had succeeded in removing the Taliban and placing Hamid Karzai into power; Karzai, thereafter, had formed a Loya Jirga (traditional assembly), with the Taliban accepting loss and changing fealty from Mullah Omar to Karzai, under what Johnson and Barfield identify as Afghan tradition. But instead of ending the war here, the United States raised troop numbers to rebuild Afghanistan as a “modern state.” This had the opposite of the intended effect; as scholars note, Afghanistan retains a logic of moral heterogeneity, undergirded by an ultra-individualist honor code (nang) with a universalist system of Islam, that not only complicates acceptance of Western systems of government but makes communities within Afghanistan especially resistant to foreign institutions. For Bush in Iraq, similar cultural forces reacted against a troop surge by strengthening the Islamic State, legitimizing terrorist grievances. Consequently, a troop surge of Bush’s magnitude will not only fail to succeed, but may have grave consequences.

Afghanistan is often colloquially referred to as the “graveyard of empires.” Biden’s advisors would do well to take after Nixon and realize that the war—one with the high aims at eliminating an ideology of evil and bringing democracy—has yielded “zilch.” As the deadline approaches, Biden must do what twenty years of American foreign policy could not: withdraw.

Kimo Gandall is an undergraduate student at the University of California, Irvine. This essay was a runner up in the 2021 John Quincy Adams Society/The National Interest Student Foreign Policy Essay Contest.