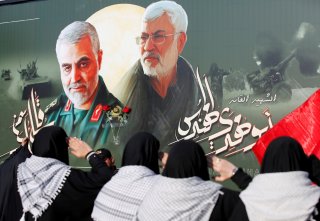 For many in the commentariat, the recent calm and mostly professional demeanor of the vice presential debate seems a welcome break from the chaos and incoherence of the first presidential debate. Unlike that first event, the vice presidential debate allowed foreign policy topics to arise for discussion. But even so, a major missed opportunity was lost. One that speaks volumes about the bipartisan nature of so much of U.S. Middle Eastern policy.

While it is certainly true that Joe Biden promises to bring back the Iran nuclear deal and that Kamala Harris and many other democrats criticized the assassination of Iranian general Qasem Soleimani back in January, the lack of interrogating Vice President Mike Pence on the issue—which he brought up in the debate—was an oversight. In the wake of the worldwide outbreak of the COVID-19 pandemic, which occurred immediately after this event, it is easy to forget just how dangerous this action made the Middle East. U.S. forces in Iraq were subjected to a missile bombardment that was played off at the time as inflicting no deaths. It later turned out that over one hundred injuries had been inflicted on U.S. personnel. Immediately after the assassination, the Iraqi parliament then demanded U.S. withdrawal from the country.

The Soleimani assassination has accomplished nothing that serves American interests and hardened global attitudes towards the United States, yet there seems to be an odd silence regarding the specifics of the fallout to his death from the opposition party and the U.S. role in the Middle East in general. With statements from Harris and many of the establishment people surrounding her on foreign policy hinting at a ‘muscular liberalism,’ it may be that such a lack of critique is intentional. After all, the last time that term was used was to justify the demolition of Libya which turned the nation with Africa’s highest living standard into a nest of warlordism, jihadist groups, and open-air slave markets.

Senator Harris and many in her coterie also tend to use hawkish rhetoric to justify endless sanctions regimes on both Syria and Iran which harms diplomacy and exacerbates regional tensions. It becomes hard to see how much of an alternative vision this really is when the alternative to the present policies still involves being a ‘strong ally’ of Saudi Arabia and its quest to engage in proxy-war throughout the Middle East.

Perhaps the main reason we hear so little strongly worded criticism of the Trump administration on this issue is Syria in particular. For many democrats to admit that the backing of Syrian rebels with arms was a colossal error that empowered many jihadist groups and led indirectly to the rise of ISIS would be to admit that foreign policy record of President Barack Obama was in fact not something anyone should want to emulate. It would also open up an uncomfortable conversation on how effectively Soleimani fought these jihadists.

The American people deserve better than the two options being presented to them in the realm of foreign policy. Anyone seeking to challenge the present status quo would be wise to keep that in mind should they seek new reserves of electoral support.

Christopher Mott is an international-relations specialist and author of The Formless Empire: A Short History of Diplomacy and Warfare in Central Asia.