Why Is China Afraid of a Few Free Market Academics? 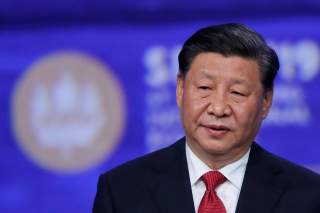 I visited Beijing a few weeks back. China’s capital continues to impress, full of growth and energy.

My first trip there was in 1992 to a city more dependent on bicycles and motor scooters than automobiles, and without block after block of gleaming new offices and hotels. Today Beijing looks like the center of a great power likely on its way to superpowerdom.

Certainly, leaders of the People’s Republic of China believe they are destined to exercise ever greater international influence. The caution and deference that the PRC once demonstrated in interacting with foreign powers has disappeared. Pick a controversy—South China Sea, Taiwan, Diaoyu/Senkaku Islands, Hong Kong, Belt and Road Initiative—Beijing has become more assertive. China’s time as a helpless victim of Western imperialism is long over.

Yet why are those sitting atop such a seemingly confident, prosperous, and strong nation afraid of a few free market academics?

During my last visit I stopped by the offices of what remained of the Unirule Institute of Economics. The well-respected organization was formed in 1993 by six economists, most importantly Mao Yushi (no relation to Mao Zedong) and Sheng Hong. My organization, the Cato Institute, gave the former the 2012 Milton Friedman Prize for Advancing Liberty to honor his work on behalf of human freedom. Now retired at the age of ninety, Mao Yushi paid a price for activism. Noted his award citation, Mao “has faced severe punishment, exile, and near starvation for remarks critical of a command-based economy and society.” The late Liu Xiaobo, a Nobel laureate, said of Mao: his “bravery is worthy of our respect.”

However, despite the hardship of its founder, Unirule was no revolutionary political organization. Its name stood for “universal rules,” essentially the rule of law. Its focus was moving toward a more market-oriented economy. The group’s work was scholarly, performed by economists and academics. Its publications were high-brow, its books often published in China. Unirule’s international contacts were mainstream and focused on economic reform.

That Unirule prospered demonstrated how far the PRC had come from the bad old days under Mao Zedong. Economic integration with the West by no means delivered a libertarian China. Still, the increasingly vibrant private economy expanded personal autonomy, opening up space absent since the PRC’s founding seventy years ago.

As for politics, other than the question of the Chinese Communist Party’s monopoly of power, most issues could be at least discussed and sometimes debated in academic and other settings. A vaguely independent media developed, which reported on misdeeds of local governments and officials. Although this slightly diluted authoritarianism might have appeared to be weakness to a few who pined for the days of the Cultural Revolution, the system offered a release valve for people who had no control over their rulers.

That gave CCP officials additional ideas to consider and solutions to employ. Unirule sponsored lectures, ran conferences, and published books. The group consulted with both local governments and state companies. Even the national authorities appeared to respect if not necessarily love Unirule. (In 1980 the government even invited Nobel Laureate Milton Friedman to Beijing to get his advice.) Asked Jude Blanchette, at the Center for Strategic and International Studies: “Without independent voices offering alternative viewpoints, how can China’s leaders make effective decisions.”

Allowing discussion—if not exactly dissent—also might have drained away some of the dissatisfaction that otherwise would have accumulated against the regime. The pervasiveness of corruption and intensity of resulting public disgust highlighted the threat both from and to Communist rule, which came much more from the natural consequences of the monopoly of power rather than from the expression of discontent with that monopoly.

Although Unirule carefully avoided controversial political questions, the commitment of those around it to human liberty was clear. Mao Yushi wrote that Mao Zedong’s “capacity for destroying the country was higher than anyone.” Last year in an interview with Bloomberg the Unirule founder declared that “The idea of communism is a tragedy, a disaster.” Indeed, “All countries that embraced communism have failed without exception.” Some non-staff but affiliated scholars were equally outspoken. Tsinghua University law professor Xu Zhangrun got himself suspended by warning that “in one fell swoop, China will be cast back to the terrifying days of Mao [Zedong].”

The group increasingly found itself in the Chinese government’s target sites in recent years. Efforts to reach a compromise with the authorities, to limit subjects discussed, for instance, failed. Over time the group’s operating space slowly shrank.

The state agency which sponsored it dropped the affiliation. Newspapers stopped running articles by its staffers. Discussions of its activities on social media, including the Chinese phenomenon WeChat, were blocked. Venues cancelled Unirule events. The website was closed down. Then the organization was twice pushed out of professional spaces. Last year the landlord, under pressure from regulators, welded the office door shut with staffers still inside; they had to call the police for rescue. About ten employees and a mass of books, papers and files ultimately crammed into a small apartment ten floors up in an aged apartment building in a distant suburb.

The group’s latest book, a collection of academic papers, is ready for publication but was rejected by the PRC’s information overseers. The process has been transferred from state to party, ensuring that everything will be assessed for its propaganda value. More seriously, Unirule’s business license was cancelled, a move the group was fighting. Sheng said he planned to focus on economic research if the CCP interdict took hold.

Perhaps even more outrageous, Sheng was twice barred from traveling to the United States for academic conferences. He recently sought to go to Russia on vacation and again was turned back at the border. His travel to even a country with a friendly relationship with the PRC posed a threat to national security, he was told. National security? This slight, soft-spoken economist threatens the survival of the country with the world’s largest population, fastest annual economic growth, greatest exports worldwide, second largest economy and second highest military outlays? Really?

Obviously, China isn’t nearly as tough as I thought. And the CCP is a pitiful wimp.

A few weeks after my visit Unirule’s life appears to have run out. The group announced that the local government had declared it to be “unregistered and unauthorized.” Although Unirule plans to fight the diktat in court, Sheng admitted that it had essentially no chance of prevailing and has begun the liquidation process. “We no longer have any space for survival,” Sheng told the Wall Street Journal. He previously noted that Unirule had been careful to follow the rules, so the Xi regime wished for the reformers to “disappear by ourselves.” Apparently Xi or someone else high up grew tired of waiting.

Zhang Lifan, an independent historian whose criticism of the Chinese government resulted in his erasure six years ago from the internet within the China’s Great Firewall, noted that Unirule “was a genuine academic body.” But “the suppression of freedom of speech and academic freedom are directly related to the ideology of the current leadership, which is engaged in an ideological return to the Mao era.”

Thankfully, Mao Yushi, Sheng, and other Unirule staffers have not been jailed, sent to the countryside for reeducation, or forced to appear at self-criticism sessions. So true Maoism has not yet returned. However, they still have suffered, and many of their countrymen have lost even more. In the PRC devotion to human liberty comes at a high price.

What can be done about China’s disconcerting race back into its totalitarian past? The West’s options are limited. An authoritarian, nationalistic government on the rise is not going to let anyone else dictate its political development, almost irrespective of the economic cost. Other than war, which most everyone recognizes would be an act of abject insanity, nothing is likely to change Beijing’s course. Indeed, the greater the threats, the more likely the PRC will crack down internally, treating virtually any discretionary contact with the West as a threat.

However, it is important to remember that the future is not fixed. China moved dramatically after Mao Zedong’s death. Had Deng swung toward rather than against political reform amid the Tiananmen Square demonstrations the PRC would look very different today. Even so until a few years ago China moved in a more liberal direction. Xi has changed that and he appears to be on the mountaintop. But he also might be staring into the abyss. Liberal forces could well reassert themselves.