Why Libya Continues to Burn Nine Years After Gaddafi’s Ouster 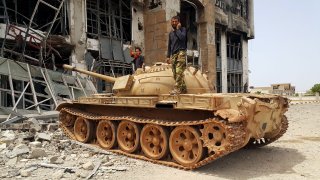 For more than a year, the U.N.-recognized Libyan Government of National Accord (GNA) has been fighting its rival government backed by the Libyan National Army (LNA) for control of Tripoli, the embattled country’s capital. After considerable backing from external powers, the GNA emerged victorious and pushed the LNA forces east. This change of venue in the civil war was the predictable result of America’s long-time addiction to regime change operations–and should serve as a cautionary tale for why we ought to quit the regime change business forever.

The United States entered the chaos of Libya in early 2011 when President Obama made the momentous decision to intervene militarily as dictator Moammar Gaddafi’s rule started to teeter following many weeks of protests and uprising in Libya. In response, he cracked down violently on his own people, a desperate attempt to hold on to power.

Addressing the American people on the night of March 28, 2011, Obama said that confronted with the “brutal repression and looming humanitarian crisis” and intelligence that Gaddafi was marching to assault Benghazi, he “authorized military action to stop the killing.” Obama’s motives were rooted in a desire to use U.S. military power to stop a violent regime from killing its own people–however, the unintended consequences suffered over the intervening nine years have proved American military power is not well-suited to settling foreign disputes.

Today, it is clear Obama’s actions didn’t end the violence in Libya. In all likelihood, his actions greatly deepened the violence, prolonging the misery of the Libyan people.

Once governmental control evaporated with Gaddafi’s downfall, Obama Administration officials estimated later in 2011 that as many as 30,000 people were killed in the resulting civil violence. A 2017 Washington Post study revealed upwards of 400,000 Africans migrated to Europe from and through Libya, and by 2019 close to 350,000 Libyans had been displaced in their own country.

To this day, there are two rival governments claiming legitimacy, fighting a brutal civil war for control. But the anarchy unleashed with Gaddafi’s death also opened the doors to a proxy war involving multiple major powers–pitting some NATO nations against each other, some of which are aligned with Russia.

LNA forces are backed by Egypt, Russia, France, and the United Arab Emirates. The GNA side is backed by Turkey, Syrian mercenaries, Qatar, and Italy. Last year,  Trump publicly praised LNA commander Khalifa Haftar for his “counterterrorism” ability, but this year the U.S. is straddling the fence, seemingly taking no side and advocating for a ceasefire. However, backed by significant Turkish military support, GNA forces turned back Haftar’s LNA militia recently—now, neither the GNA nor Turkey are in a mood to talk ceasefires.

GNA military spokesman Abdelmenaam al-Draa declared in early June that the GNA had launched an offensive to take the Libyan city of Sirte—situated between Tripoli and Benghazi—from the LNA, planning to “continue east until we liberate all of Libya.” Turkish Foreign Minister Mevlut Cavusoglu told Al Jazeera that to call for a ceasefire “is stillborn. It's not realistic, it’s not sincere.”  When Haftar thought he had the military advantage, he was focused on victory, not ceasefires. Now that the GNA side is (currently) ascendant, they are pressing their advantage to achieve a military victory.

The result will be more violence, more bloodshed, and more involvement by external forces, yet without military resolution. There are too many powerful states with their own motivations to see their side win, willing to invest resources to tip the scales in their favor. Had Obama conducted even a basic reading of Middle Eastern history over the past century in 2011 he would have realized the insertion of military power into the chaotic internal affairs of Libya were destined to fail.

The lesson for the United States isn’t that we should have used more force, or deployed more troops, but that we should realize U.S. military power isn’t going to solve highly-charged political, religious, and ethnic quarrels.

Trying to force regime change at the barrel of a gun or through economic sanctions is doomed to failure. Unfortunately, this failed policy has succeeded only in exacerbating violence and suffering—and continues to work against American interests.