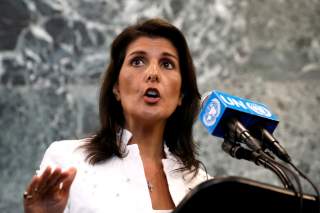 On September 10, U.S. Ambassador Nikki Haley convened a special panel of the United Nations Security Council to address an important—if surprising—topic: the threat corruption poses to global peace and security. “For all the time we spend here discussing conflict,” Ambassador Haley remarked, “we hardly ever talk about how corruption fuels the instability, violence, and criminal activity that put countries on our agenda.” Haley, who, as the U.S. Permanent Representative holds the rotating title of President of the Security Council this month, warned of the costs of inaction. She invoked the Tunisian anti-corruption protests that sparked the Arab Spring, the extreme kleptocracy of ousted Ukrainian president Victor Yanukovych, and the resource-driven civil war in South Sudan as examples of unintended consequences when the security council has a “head-in-the-sand approach” to corruption.

Haley was right to draw attention to the relationship between corruption, violence, and human suffering, which is well documented. And she was also correct that the Security Council—as a global body tasked with maintaining international peace and order—has largely ignored the role corruption plays in precipitating and prolonging geopolitical crises and undermining state legitimacy. Such a perspective in increasingly necessary in an age when major powers, most notably Russia, have sought to weaponize corruption as a tool of political influence and subversion. Fighting corruption is also vital as a rising China puts forward an alternative model of foreign assistance and overseas investment that is at best indifferent to, and at worst reliant on, graft. (At the panel, the Russian representative predictably, if ironically, objected to Haley’s proposal as infringing on national sovereignty.)

But if Haley is serious about galvanizing a coordinated international response to corruption, she might want to start with her colleagues in the Trump administration and the Republican majorities in Congress. Under President Trump, the United States’ anticorruption agenda has been a case study in missing the forest for the trees. On the one hand, over the past two years, executive agencies with international anticorruption portfolios have continued to implement programs and policies aimed at strengthening global anticorruption efforts and sanctioning corrupt actors in the international system. For example, the Department of Justice has continued to identify and seize the proceeds of foreign corruption inside the United States under an Obama-era program known as the Kleptocracy Asset Recovery Initiative. In the same vein, State Department and USAID have maintained support to foreign governments and civil society organizations seeking to fight graft and promote transparency in their own countries. And in an exciting development, since late 2017 the Treasury Department has begun issuing sanctions against foreign actors involved in serious corruption under a law passed by a Republican-controlled Congress and signed by President Barack Obama in 2016.

Yet mounting an effective international response to pervasive corruption, as Ambassador Haley called for in her remarks to the Security Council, will require more than modest diplomatic commitments, small-scale foreign assistance programming, and mostly symbolic penalties against low-and mid-level officials. Fighting graft is as much a matter of political will as it is a question of technical capacity, and until the United States and other major powers are willing to elevate anticorruption to the level of a foreign policy priority on par with other security concerns, international coordination on anti-corruption is likely to remain superficial at best.

Unfortunately, the Trump administration and the current Congress have exhibited a troubling indifference to corruption when it conflicts with other domestic and foreign policy priorities. Nowhere has this been truer than in Latin America, where the United States has—with good cause—denounced and sanctioned corrupt actors in Venezuela, even as it tolerates high levels of graft among its security partners in the region, notably those in Central America. This pattern was on vivid display the week before Ambassador Haley’s speech at the Security Council when Secretary of State Mike Pompeo praised the government of Guatemala for its “efforts in counternarcotics and security” after it expelled the head of an acclaimed anti-corruption body from the country. That anti-corruption body, the Commission Against Impunity in Guatemala, or CICIG, had received strong bipartisan support for its decade-long efforts to root out corrupt officials in a country plagued by endemic graft. However, when Guatemalan President Jimmy Morales—whom CICIG had recently begun investigating for fraud—declared war on the commission, the Trump administration wasted no time in siding with him.

The Trump administration has also been speaking out both sides of its mouth when it comes to corporate malfeasance. On the one hand, the Department of Justice and Securities and Exchange Commission continue to vigorously sanction bribery of foreign officials under the Foreign Corrupt Practices Act in a way that far surpasses the efforts of any other nation. At the same time, the Administration has withdrawn as an implementing country of the Extractive Industries Transparency Initiative, a widely-praised multilateral effort to promote of disclosure of revenues from exploitation of natural resources on public lands. That withdrawal came on the heels of Congressional action, undertaken with the encouragement of the White House, to revoke an Obama era rule requiring oil, gas and mining companies listed on U.S. stock exchanges to disclose how much they pay governments for access to resources. Such anti-transparency moves are hard to square with a commitment to fighting graft, given that resource-rich developing countries are among the most afflicted by grave corruption, and that the extractives sector accounts for a significant share of transnational bribes.

Finally, the United States will struggle to catalyze a global anti-corruption movement if it cannot lead by example. For instance, President Trump undermines the ability of his Administration to advocate effectively for worldwide transparency and accountability in several ways. Examples include commingling of his political office with his business interests, his refusal to disclose his tax returns or divest from his real estate empire, and his open hostility to FBI investigations into efforts by foreign powers to influence and coopt senior advisors on his campaign. The same is true of the warm reception the President has offered to kleptocratic leaders like former Malaysian prime minister Najib Rezak—a subject of a DOJ corruption probe—Egyptian president Abdel Fateh al-Sisi, and Russian president Vladimir Putin.

In her remarks to the Security Council, Ambassador Haley warned that “if we fail to take corruption seriously now, we will doom ourselves to deal with the violence it creates in the future.” That warning is worth heeding, but much turns on what it means for a country “take corruption seriously.” After nearly two years in power, the Trump administration has yet to put its money where its mouth is.

Trevor Sutton is a fellow for National Security and International Policy at the Center for American Progress.