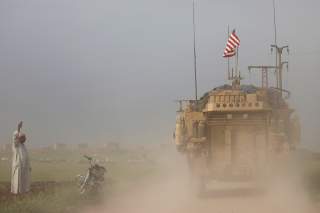 Donald Trump has announced that he is bringing home America’s troops from Syria just two years after he was elected president. His plan to end one of America’s many wars prompted a mob to gather outside the White House, pitchforks at the ready.

The mob wasn’t made up of angry farmers or workers. Instead, the feverish crowd constituted Washington’s war party: ivory tower think-tankers, editorialists promoting perpetual war, wannabe commanders-in-chief eager to launch their next democracy crusade, and politicians who collected draft deferments when their lives were on the line—but who now see the need for the United States to “exercise leadership.”

The cacophonous criticism of the president’s decision within the Beltway may be the best evidence of his wisdom. Syria is not America’s war. Washington’s security interests always were minimal. The humanitarian tragedy in the country has been overwhelming, but it is beyond America’s ability to fix it.

Most directly, the president’s critics complain that the Islamic State is not yet eradicated from the earth. Wrote the New Yorker’s Robin Wright, “long-term stability is still far from guaranteed against a force that remains a powerful idea—both in war-ravaged Syria and throughout the volatile region—even as its military wing is decimated.” However, the United States can’t fix the underlying causes of radicalism. Moreover, the Islamic State’s long list of enemies—Iraq, Syria, Turkey, Jordan, Gulf States, Iran, Russia—should be able to handle the aftermath. America should not do everything for everyone forever.

Washington’s “usual suspects” came with a gaggle of bizarrely ambitious alternative objectives to justify America’s continued military presence. Why remain in a multisided civil war filled with bad participants and choices? Why stay to protect the Kurds, satisfy the Turks, limit the Iranians, cow the Syrians, moderate the Russians, and perhaps cure the common cold?

Congress has not authorized military action in Syria, even against the Islamic State. The authorization for the utilization of military force passed after 9/11 was directed against Al Qaeda, not new groups which did not then exist and did not participate in the attacks. That AUMF cannot be stretched to cover Syria, Iran, Russia, Turkey, or anyone else.

Of course, Congress had no reason to authorize force in Syria, which is not a security problem for America. The U.S. prospered for decades while a hostile and even stronger Syrian Arab Republic was allied with the Soviet Union. Would it be good if Bashar al-Assad was a warm, loyal, devoted ally like, say, Saudi Arabia’s Mohammed bin Salman? Sure (well, probably). But the fact that Assad is not isn’t a cause for military intervention. As a superpower, America has interests all over the world. As a superpower, most of them aren’t particularly important. Very few are worth war.

Russia’s involvement in Syria doesn’t matter. Washington is allied with Turkey, Egypt, Jordan, Israel, and the Gulf States. The United States shares influence in Iraq and Lebanon. Moscow has a close relationship with Syria, a long-time ally now a wreck of its former self. Russia has some clout with Iran, an overstretched, uneasy partner at best. Who is winning the Russo-American contest? Americans can sleep at night.

The Tehran regime is malicious, but probably less so than Washington’s Saudi partner, which has destabilized the region through its war in Yemen, abducted Lebanon’s prime minister, and supported fundamentalist Wahhabism and radical groups. Despite the administration’s bizarre fixation on Iran, the latter does not threaten America, which is multiple degrees more powerful. Israel, which possesses multiple nuclear weapons, is also able to defend itself. Iranian activity in Syria does not diminish the lethality of Israel’s deterrent.

Perennial war-hark Sen. Lindsey Graham complained that the pull-out would “be seen by Iran and other bad actors as a sign of American weakness in the efforts to contain Iranian expansion.” Actually, supporting a major ally under attack isn’t really “expansion.” (Washington does it all the time!) Anyway, plenty of other nations have reason to help constrain Tehran, whose modest influence is most felt in divided and war-ravaged states. But they certainly prefer not to act if the United States is willing to do their dirty work.

National Security Adviser John Bolton insisted that the United States was “not going to leave as long as Iranian troops are outside Iranian borders, and that includes Iranian proxies and militias.” This fixation on Tehran has badly distorted U.S. Middle East policy. Iran’s relationship with Syria may not be to America’s liking, but it is long-standing and exists at the invitation of Syria’s legitimate government. Both Damascus and Tehran have far more at stake in maintaining their relationship than the United States does in disrupting their ties—especially since Washington has threatened both countries militarily. America won’t be able to force anyone home.

To presume that Kurdish forces, at the behest of a small American presence, would permanently block Syrian-Iranian cooperation when the greatest and most immediate threat against them comes from Ankara is, well, fantastic. It’s more likely that a Syrian-Kurdish modus vivendi would better protect some degree of Kurdish autonomy from Turkish attack.

A few charming souls complain that Washington’s withdrawal would leave the Kurds vulnerable to Turkey. For instance, Bloomberg’s editorial board blithely insisted that “the White House should be saying no to” Ankara’s invasion plan, instead of leaving “America’s best ally in the fight against Islamic State at the mercy of Erdogan, and of Syrian forces backed by Russian and Iranian military power.” However, Washington’s objections did not stop Turkey’s earlier operations against the Kurds, whom Ankara views as a serious threat to Turkey’s territorial integrity (remember the U.S. Civil War?).

The Washington Post complained of “the stab in the back,” but the United States never promised Syria’s Kurds military protection, which would have to run forever. Indeed, Washington already made that strategic choice when it did not protect Kurdistan from retaliation by Iraq, Iran, and Turkey after the latter held an independence referendum. Washington also made little to no effort to block decades of brutal military operations against the Kurds in Turkey or protect them in the assault on Afrin and surrounding territory in Syria earlier this year. The Pentagon cannot justify a permanent garrison illegally occupying Syria amid a civil war to protect an unofficial militia from attack by both the legally legitimate government and a neighboring NATO ally.

Hope also burns eternal in some hearts that by effectively dismantling the country—illegally occupying roughly 30 percent of Syria’s territory along with much of its oil resources—Washington can pressure Assad to step down, accept elections, or otherwise become the “reformer” that Hillary Clinton once proclaimed him to be. However, Assad is more secure today than at any other point since the civil war erupted. In August I visited Aleppo and Homs, as well as the Damascus suburbs once held by insurgents. All were under the Syrian military’s control. The American presence is inconvenient, but having survived the worst of the civil war, why would Assad quit now?

Then there is the oft-repeated concern for stability. Which the United States favors, at least when it is not invading Iraq, ousting Libya’s government, sanctioning Iran, and backing recklessly aggressive Saudi interventions. In any case, America’s small presence cannot stabilize the country or region: political change is necessary to reform the underlying conditions, while training local security forces in Syria could trigger another stage in the ongoing civil war. Former U.S. ambassador to Syria Theodore Kattouf has acknowledged to The New Yorker that current “U.S. troops levels are insufficient to otherwise change the non-ISIS facts on the ground.” Genuine stability requires addressing Damascus.

Of course, Trump’s critics play the usual rhetorical games. Withdrawing means “turning over” the country to one or more bad actors, as if Syria was America’s to give away. Those who demand a permanent presence conveniently ignore the lack of a legal basis for even temporary intervention. And objectives—such as thwarting Iranian, Russian, and Syrian misbehavior—are stated without explaining how a couple thousand Americans would achieve them. The ever-hysterical Sen. Graham complained of “devastating consequences for our nation, the region, and throughout the world.” Actually, the Mideast matters far less these days, and would diminish in importance still further if Washington did not make that dismal assembly of nations central to American foreign and military policy.

Graham also denounced President Trump for his “Obama-like decision,” the ultimate slur from such a war-happy neoconservative. Charles Lister of the Middle East Institute complained that Trump’s decision “could be worse” than the withdrawal from Iraq since Syria is in worse shape. Other Republicans also pointed to the Iraqi pullout, ignoring the fact that Obama hewed to George W. Bush’s agenda and timetable. And the troops could not stay without a Status of Forces Agreement, which Bush was unable to negotiate because Iraqi support was lacking. Additionally, a continuing American presence would not have prevented violence; rather, U.S. troops would have been targeted by Shia extremists as well as Sunni insurgents and terrorists. Responsibility for ISIS’s rise lies in Baghdad, not Washington.

Nevertheless, the president’s detractors remain inconsolable. Tom Rogan, an ever-hawkish columnist for the Washington Examiner, proclaimed the “outsize security and political benefits” of America’s “military footprint” in Syria. In fact, the presence is all cost, further entangling Washington in multiple Middle Eastern conflicts, even creating the potential for military clashes with Turkish, Russian, Iranian, and Syrian forces. It brings to mind President Ronald Reagan turning American civilian and military personnel into targets by intervening in Lebanon’s civil war. With no critical U.S. interests at stake in Syria, this policy is not just bad; it is stupid.