Will Coronavirus Kill the European Union? 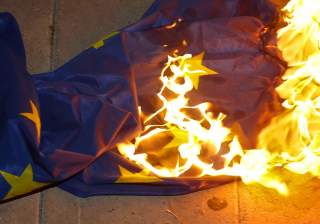 It took COVID-19 several weeks to mass migrate from China to Europe, but the continent is now awash in the virus. The pandemic has fully arrived in Italy and Spain. Other nations await the disease, hoping to slow its spread.

It will kill many Europeans. It also might kill the European Union, at least the idea of a European community in any meaningful sense.

In the name of solidarity Italy approached its neighbors to assist in the coronavirus crisis that threatened to overwhelm its health care resources. Running out of intensive care beds, doctors were ordered to “aim to guarantee intensive treatment to patients with the greatest chance of therapeutic success.” Those most likely to die will to be left to … die.

Europeans might not be surprised to see that happen in the less wealthy interior of China. But in the industrialized, advanced, and liberal continent of Europe? Rome put in a call to its neighbors, countries with which it was joined in the European Union. States which routinely preened because of their supposed moral superiority to “Anglo-Saxon capitalism” resulting from their more socially conscious economies, which promoted “solidarity” with others.

Alas, the Italians discovered that the Europeans’ phone numbers were all busy. No one offered anything. Austria closed its border to Italians who could not prove they were disease-free. Germany banned the export of medical protection equipment, such as face masks. The company 3M pointed to the prohibition in explaining why it could not supply Italy’s needs.

The refusal of its neighbors to help was compounded by Christine Lagarde, the French president of the European Central Bank, who said it as not her institution’s responsibility to “close the spreads” between Italian and German government bonds. Her comments sparked a massive increase in Rome’s borrowing costs. That, in turn, triggered a 17 percent fall in Italy’s stock market.

Italy long has been one of the continent’s economic sick men. Although Greece got most public attention with its near default, the threat posed by Rome, whose sclerotic industrial operations and regulations precluded productivity and efficiency, was far worse. Italy possesses the continent’s fourth largest economy; the $2.1 trillion GDP is larger than Russia’s, beyond the EU’s ability to bail out. Italy could crash out of the Euro and bring down banks across the continent.

However, the Europeans have no interest in subsidizing what they see as Italian profligacy. Rome has frequently been at odds with the EU and its dominant members, most notably Germany and France. During the Euro crisis a decade ago Berlin worked to force out Prime Minister Silvio Berlusconi, weakened by the loss of his parliamentary majority, which sparked complaints that the nation was being treated like a colony. That was but one of Rome’s conflicts with Brussels and its leading powers, which helped give rise to a powerful populist movement.

Financial Times columnist Tony Barber noted that “Among the eurozone’s 19 members, Italy stands out as the one that never fully recovered from the sovereign debt and bank crises that swept across the currency union after 2000. Italy’s manufacturing sector shrank by a quarter in that crisis. Many of its banks, loaded with government debt, remain fragile.” The COVID-19 pandemic is likely to push Italy’s economy to the wall.

Yet, opined Nathalie Tocci of Rome’s Institute for International Affairs: “It is back to the future, where Italy is left on its own.” She added: “It was the case with the Eurozone crisis, then the migrant crisis of 2015-16 and now the coronavirus crisis. It is the same old story and the political implications could be massive.”

In 2018 a left-right populist coalition took power, with Matteo Salvini the dominant figure. Rome sparred with Brussels over its rule-busting budget and harsh treatment of migrants. Last year he broke up the partnership in an attempt to catapult his Northern League into control. That effort failed, but he remains the country’s most popular politician and likely to gain the prime minister’s job. Indeed, he has attacked the government’s inadequate containment efforts, reinforcing his party’s hardline on international migration and border security.

Europe’s failure to act offered him another cause celebre. Complained Salvini: “Italy needed help and it has been given a slap in the face.” He said he wanted compensation from the ECB: “The only help that has come from Europe has been to cause the collapse of the stock market and to make the spread go crazy.” Even the more centrist prime minister and president criticized the continent’s response. Said President Sergio Mattarella, Italy had expected “initiatives of solidarity and not obstacles to action.”

Rather than be chastened by Rome’s criticism, the Europeans chose more isolation. To his credit, France’s Emmanuel Macron remained true to his philosophy, calling for greater continental cooperation. However, the Czech Republic, Poland, and Slovakia closed their borders to all foreigners. Denmark forbade anyone without an essential purpose from crossing. Austria suspended air travel not only with Italy, but also France, Spain, and Switzerland. Croatia is testing some visitors while insisting that others—from Italy and elsewhere—spent 14 days in official government quarantine.

Cyprus does the same to Italians while sending residents from several other European nations into monitored self-isolation. Estonia instructs residents from Italy and seven other European countries to spend two weeks in self-quarantine. Germany largely halted visitors from Austria, Denmark, France, Luxembourg, and Switzerland. Hungary refuses to admit Italians and residents of other nations with heavy infections. Malta requires tourists to endure 14 days of self-quarantine and bans residents of Italy, as well as France, Germany, Spain and Switzerland. Norway closed its border to all but residents of its Scandinavian neighbors. Portugal is restricting traffic from Spain. Ukraine bars all visitors. More restrictions are likely as every European country puts its own people first, as governments have from time immemorial.

All this was predictable. The EU began as a limited vehicle to bring German and France together economically. Then it turned into a “common market,” that is, an expanding free trade zone. These were sensible cooperative measures which infringed on no state’s sovereignty. However, pressure was strong in Brussels for creation of the equivalent of the United States of Europe, a new nation state to compete with America. A gaggle of Eurocrats—politicians, bureaucrats, academics, journalists, businessmen, and other internationally-minded elites—became an influential force promoting an ever more consolidated government. However, the effort was almost entirely top-down.

Czech President Vaclav Klaus, among others, warned of the EU’s democratic deficit. When a constitution was put to Dutch and French voters, they turned it down. So the Eurocrats returned with a treaty that only required approval by voters in Ireland (due to its constitution), who also turned it down. Brussels insisted on another vote, when the measure passed. Few Europeans vote for members of the European Parliament based on European issues; most use their ballot to reward or punish parties based on their domestic performance. No one in the EU’s executive is elected by a public anywhere in Europe.

Other than a few deracinated denizens of Brussels, virtually no European views himself or herself first as a European. No one salutes the EU flag. No one sings the EU anthem. No one roots for the EU football (soccer) team. Rather, sporting events demonstrate how loyalty is almost entirely national. And, we now see, no one shows solidarity with one’s neighbors when there is a health crisis at home. Italy is essentially on its own. As is every other EU member.

Macron has worked assiduously to build support for a stronger EU with independent budget powers but has faced opposition from Germany and other states. The departure of the United Kingdom, the fount of parliamentary government which never would willingly yield control of its finances, was expected to give Macron’s campaign a boost. However, it turns out that most Europeans still want to make their own decisions. Although no other exits from the EU look likely, there is little support for expanding Brussels’ powers. Moreover, Macron has slowed the accession process for Balkan states which look unready for membership.

Anger from the blank response to Italy’s plea is likely to persist beyond the health crisis. That alone won’t break up the EU. But no one would be surprised if another European financial crisis follows. Italy already is weak; the cost of treating thousands of ill Italians combined with the costs of shutting down the country to halt infections could break the economy.

Indeed, some economists contend that Rome should preemptively request financial assistance from both the EU’s eurozone bailout fund and the International Monetary Fund. However, noted Barber: “Uppermost in everyone’s mind is the thought that, if Italy were to need help, the cost might run to hundreds of billions of euros. Almost certainly it would be no straightforward matter to win the approval of other European governments, divided as they are over eurozone reform, refugee policies and other issues touching on national sovereignty.”