Yes, Donald Trump Dumped the Kurds (And We Should Not Be Shocked) 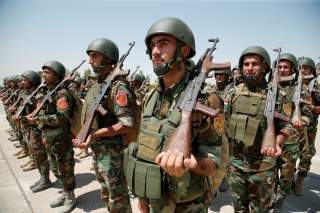 President Trump has apparently decided to make a major shift in Washington’s policy regarding the Syrian Kurds. Instead of opposing Turkey’s use of force to clear out Kurdish- controlled territory in northern Syria, Washington now seems willing to step aside. That move would be a rather cynical betrayal of the Kurds, but not a surprising one.

Until now, Trump had largely continued the Obama administration’s policy of regarding Kurdish forces as useful military allies in Syria’s violent, multi-sided internecine conflict. In particular, Kurdish militias were quite effective in inflicting defeats on ISIS and other jihadi forces in northeastern Syria. The United States provided funding, training, and weaponry to Kurdish units, and seemed willing to look the other way as the Kurds pursued their political goal of establishing a de facto autonomous region in northern Syria similar to the entity their brethren in Iraq have maintained since the early 1990s.

There was one awkward, increasingly troublesome problem with Washington’s approach, however. Turkish leaders regard Kurdish separatist ambitions in both Iraq and Syria as a grave threat to Turkey’s own territorial integrity, given the size of the restless Kurdish population in southeastern Turkey. President Recep Tayyip Erdogan’s government charges that Syrian and Iraqi Kurds have ties to the Kurdistan Workers Party, which has waged a sporadic secessionist war in southeastern Turkey for decades. Turkey’s resentment at U.S. policy toward the Syrian Kurds is not a minor concern to Washington, since the country is an important NATO ally.

Trump’s latest move would hardly be the first time that U.S. leaders have sacrificed Kurdish allies for larger geopolitical goals. Indeed, it would be the third example of a U.S. policy reversal and outright betrayal of the Middle East’s Kurdish population in barely two generations.

In 1973, President Richard Nixon made a secret agreement with the Shah of Iran to begin providing covert financial and military support to Kurds in Iraq who had launched an insurgency against Saddam Hussein, seeking to establish an independent Kurdistan in northern Iraq. (Saddam had angered U.S. leaders earlier that year by signing a Treaty of Friendship and Cooperation with Moscow.) Kurdish officials conducted planning sessions in Washington with the Central Intelligence Agency, and CIA agents assisted Kurdish Peshmerga militia units to harass Saddam’s forces.

However, in March 1975, the Shah’s regime suddenly signed a peace agreement with Saddam and withdrew Iran’s support for the Kurdish insurgency. It is not clear if the move surprised and annoyed Washington, but U.S. officials clearly were not willing to pressure their more valued ally on behalf of the Kurds. The United States followed Tehran’s lead and withdrew its assistance, causing the rebellion to collapse and exposing the Kurds to Saddam’s heightened, persistent persecution.

When Kurdish leaders moved to transform the Kurdish region’s de facto independence into legal, internationally-recognized independence in 2017, however, the limits of Washington’s support became exceedingly clear. The Kurdistan Regional Government (KRG), led by President Masoud Barzani announced its intention to hold a referendum in September 2017 on declaring independence from Iraq. But when blunt warnings to Barzani came in from the central government in Baghdad and such neighboring countries as Turkey and Iran, the United States pressured the KRG to exercise more caution. Nevertheless, the Kurdish government went ahead with the referendum, which produced the predictable result of an overwhelming vote for independence.

Baghdad and neighboring capitals immediately closed all air corridors leading to land-locked Kurdistan and imposed devastating economic sanctions. The Iraqi government went further, launching a military offensive to seize disputed, oil-rich territory around the city of Kirkuk. The KRG had gradually established effective control of most of that area since the Iraq War; now those important gains had evaporated.

Despite openly acknowledging that the Kurds had been important allies against ISIS, the U.S. government stood by quietly while Baghdad and Iraq’s neighbors crushed the latest Kurdish hopes for independence. As with the new decision to stand aside while Turkish forces conduct full-scale military operations in northern Syria, the Trump administration concluded that Kurdish actions were interfering with more important U.S. geopolitical interests. U.S. leaders did not hesitate to sacrifice their Kurdish allies then or now.

The Kurds finally may learn that it is hazardous to trust the United States. Washington’s conduct toward that population over the decades is hardly an occasion for national pride. But U.S. leaders are not uniquely duplicitous. Historically, most great powers have sacrificed allies and clients whenever more central interests seemed to be at stake. Moreover, the Kurds are not the only victims of U.S. policy shifts. President Nixon did not let Washington’s longstanding alliance with Nationalist China (Taiwan) impede his attempt to achieve a rapprochement with Communist China. Nor did Jimmy Carter do so when he made the decision to shift formal diplomatic ties from Taipei to Beijing and terminate the mutual defense treaty with the Taiwanese.

The lesson for U.S. allies and security clients should be the political equivalent of caveat emptor (buyer beware). Washington’s policies are subject to change, and no foreign government should assume that its relationship with the United States is sacrosanct. If the incentives are sufficient, U.S. leaders will betray an ally (especially a small ally) without much hesitation. That’s how a great power operates, and there is no evidence of American exceptionalism on that score.

Ted Galen Carpenter, a senior fellow in security studies at the Cato Institute and a contributing editor at the National Interest, is the author of 13 books and more than 800 articles on international affairs. His latest book is NATO: The Dangerous Dinosaur (2019).