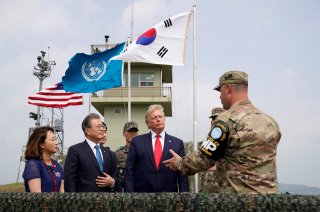 For South Koreans, postponing elections is unimaginable because of their dark past. But little did they know that simply exercising their inalienable right to improve their lives would shine yet another spotlight on their country. The legislative elections proceeded despite a national health crisis while showing the world how to conduct them as safe as possible and how political candidates can secure votes. The results signaled the future state of affairs at home as well as the possible trajectory of the Korean Peninsula, the U.S.-South Korea alliance, and geopolitical relations in Northeast Asia.

In a landslide, progressive South Korean president Moon Jae-in’s ruling coalition scored the largest win in legislative elections since the country’s democratic transition in 1987 from decades of authoritarian rule. Moon’s Democratic Party and allied parties swept up 180 of 300 seats in the National Assembly in a new voting system that combined direct and proportional votes. Voter turnout recorded the highest level since 1992 of 66.2 percent. These elections also ushered in a new generation of lawmakers and a record-high number of elected women of fifty-seven, or 19 percent of all seats.

Traumatized by postwar military rule from 1963–1988, postponing elections are out of the question for South Koreans. The president has the legal authority to postpone presidential and National Assembly elections if calamities make them impossible to conduct. But the 1950–1953 Korean War did not even stop South Koreans from voting in the 1952 presidential race nor the H1N1 influenza outbreak in the 2009 by-elections. The electoral system needed to make accommodations again this time. South Koreans were required to wear masks and plastic gloves, disinfect hands, receive temperature checks, and stand at least one meter apart in line at voting booths. Symptomatic persons, those in self-isolation, and coronavirus patients could vote at makeshift booths during select times and by mail, if they registered by deadline. But the system did have its problems, including half of the voters overseas unable to cast ballots because elections operations were disrupted by the pandemic in fifty-one countries.

These elections could be read by world leaders as signaling that their response, or perceived response, to a pandemic could determine their political fortunes. The coronavirus is at the forefront of people’s minds, eclipsing other issues that would normally determine how they vote.

Absent an epidemic, Wednesday’s vote might have been a tougher race for Moon’s supporters as he was battered by a sluggish economy, corruption charges involving his close aides, and allegations of authoritarianism given the nature of his prosecutorial, judicial, electoral, and socialist economic reforms. That said, even then shy voters and moderates might have found the alternative worse: the conservative party appeared largely out of touch with public sentiment and its image is still generally associated with the impeachment of their last president over corruption scandals, which tainted their hard-fought democracy and brought shame to their country. Plus, some South Korean political commentators say the government’s pledge to provide emergency disaster relief aid to cope with the economic fallout of the coronavirus outbreak might have been attractive to many voters.

During the campaign, the ruling party played up the Moon government's response to the virus and international recognition for it. Meanwhile, the opposition credited the flattening curve to the Korea Center for Disease Control’s leadership, health professionals on the front lines, and the Korean people who largely complied with health guidelines. In televised news programs and various media outlets, some doctors claimed that they had not been allowed to test symptomatic people before the elections while others questioned the credibility of official records categorizing the cause of deaths as other than the coronavirus. The government was also heavily criticized for failing to close its borders to China during the initial outbreak, leading to a petition on the presidential office’s website with over 1.4 million signatures to impeach Moon.

But these voices were notably buried in the broader debate as the elections neared, perhaps as many Koreans saw more advanced and stronger countries struggling even more while their own country received global praise as a poster child for containing an unprecedented crisis.

At the outset, the legislative elections were widely understood to be a popularity test or springboard for key candidates’ presidential campaigns in two years’ time and a referendum on Moon’s policies. But they also turned out to be a referendum on the opposition and shy voters were apparently absent this time. Any healthy democracy requires a strong opposition, but in South Korea’s case, the conservative base was in shambles ever since the 2016 impeachment and subsequent ouster of previous conservative President Park Geun-hye, failing to consolidate and rebrand itself while a few key candidates were accused of splitting conservative votes by running as independents.

The real test for both the progressives and conservatives begins now as they look to the 2022 presidential race. The South Korean Constitution allows each president a single, five-year term. This means Moon will need to deliver real results on the economy, welfare, and income disparity to set the stage for another progressive win. The conservative opposition, meanwhile, will need to first consolidate its base and regain public trust that its future candidate can govern in a clean and effective way.

With the progressives securing a three-fifths supermajority in the new legislature, Moon will be able to drive his agenda and pass laws on his priorities, including a supplemental stimulus budget and judicial and prosecutorial reforms. But critics have already raised questions over potential power abuse as a new investigation agency for senior public servants could be stacked with progressives. If so, then the opposition will be sure to criticize the agency if it were to block investigations into any alleged scandals involving progressive officials or even Moon and any purported accomplices. A hot-button issue that is more complicated is amending the Constitution—that includes allowing a two-term presidency and reducing and distributing presidential powers—because it requires a two-thirds majority vote.

Foreign policy typically is not a factor for voters in legislative elections, but the results certainly affect South Korea’s international relations. The progressive legislative win, which saves Moon from an immediate lame-duck presidency, provides momentum to push his government’s inter-Korean and foreign policies. By improving cross-border relations, maintaining sufficient autonomy from the United States, and standing up to Japan, South Korean progressives could be placed in a more advantageous position ahead of the 2022 presidential elections.

The Moon government will actively seek ways to resume inter-Korean cooperation, starting with humanitarian aid to help Pyongyang tackle its viral outbreak, despite an unwilling North Korean partner that has so far rejected dialogue. The coronavirus pandemic might provide an opening as it has forced major closures along North Korea’s border with China. This could compel Pyongyang to diversify its donor base, eventually probing for South Korean aid, to help deal with an apparent outbreak in North Korea and keep its economy afloat. Moon’s parallel objective here would be to induce the resumption of U.S.-North Korea talks so that progress in denuclearization can lead to the lifting of some sanctions, in turn, fueling inter-Korean projects and advancing his Korean peace agenda. But pandemic diplomacy could begin and end with humanitarian cooperation without catalyzing nuclear diplomacy as Pyongyang’s inclination will be to treat the two as separate issues.

The Moon government will likely be bolder in its relations with Washington and Tokyo, potentially leading to more friction with both capitals. Seoul may feel it has gained some political leverage by sending the U.S. large shipments of virus test kits upon U.S. President Donald Trump’s sudden request, though the feeling may not be reciprocal. Alliance relations could be further strained if Seoul pushes to forge inter-Korean projects that would require relaxation of the international sanctions regime or are perceived as diverging from a coordinated approach with the United States to incentivize denuclearization. Seoul is expected to press for expediting the transition of wartime operational control from the U.S. military to South Korea within Moon’s presidential term before military conditions are met. In defense cost-sharing negotiations, Seoul could double down in its resistance to Trump’s exorbitant price hike for stationing 28,500 U.S. troops on the Korean Peninsula—South Koreans across the political spectrum are united in opposition.

Moon could become tougher toward Tokyo, further damaging South Korea-Japan relations, although leaders in both countries are driven by nationalism. Seoul could decide to finally terminate the General Security of Military Information Agreement (GSOMIA), in retaliation if Japan shows no sign of lifting export controls soon on key materials for South Korea’s semiconductor industry. This would add more friction to Seoul’s relations with Washington. The pact provides for the sharing of intelligence in real-time among Seoul, Tokyo, and Washington on North Korea’s nuclear weapons program and is a trilateral security cooperation mechanism to be used during a contingency or crisis on the Korean Peninsula. On the other hand, the two sides might seek to repair relations as economic predicaments from the pandemic have made both leaders vulnerable in international politics.

Geopolitics in Northeast Asia could become more complicated when the pandemic begins to subside, particularly if China finds itself fending off accusations of having caused the pandemic. Chinese president Xi Jinping may decide to make his planned visit to Seoul soon to show the world that Beijing has fully recovered from the outbreak and still has friends in the region. Moon has been actively seeking a visit by Xi in the first half of 2020 to enhance cooperation on economic issues and North Korea. This scenario could become problematic for Washington, particularly if cracks form in its policy coordination with its Asian allies on North Korea.