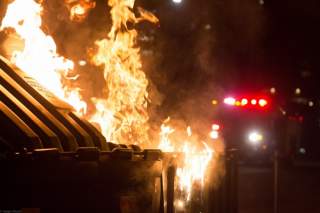 The shooting of two officers in Ferguson early Thursday morning will further inflame relations between the public and law enforcement in Ferguson. The shooting comes a little over a week after the Justice Department released a report accusing the Ferguson police department of blatant racial bias and a day after Ferguson Police Chief Thomas Jackson announced his resignation from the department, effective March 19.

St. Louis Police Chief Jon Belmar said in a press conference Thursday morning, “I don't know who did the shooting, to be honest with you right now, but somehow they were embedded in that group of folks.” However, some protesters at the scene, including self-proclaimed activist DeRay McKesson, maintain that the shooter was not among the crowd and was actually hundreds of feet away, perhaps atop a hill.

While these may seem like nothing more than premature conflicting witness statements, these two differing accounts mean a lot—a whole lot—especially in Ferguson. McKesson, a twenty-nine-year-old Teach for America and Bowdoin alum and founder of the Ferguson Protester Newsletter, is black. Chief Belmar, an Arkansas State and FBI National Academy alum, is white. It seems that the stage is set for yet another perfect storm in Ferguson.

After all, the Michael Brown case and subsequent protests created an even starker divide in Ferguson between the low-income predominantly black communities and the predominantly white local police force. And there have been many opportunists and interventionists who have taken advantage of this cleaving.

In August, TNI’s John Allen Gay highlighted the various outsiders who traveled to Ferguson apparently to instigate fighting and promote their own respective political agendas. Some of these instigators were also called out by locals in Ferguson. What were (or are) the true motives of these outsiders who intentionally riled up locals? It’s hard to say for sure.

But there is one thing that could be said.

Any such outsiders are not doing the citizens of Ferguson any favors. In fact, anyone that openly and strongly encourages those in Ferguson’s black community to protest is not acting in those citizens’ best interest. That is not to say that anyone who encourages and endorses the protesters has malicious intent and wishes to watch Ferguson fall apart. It does mean, however, that anyone who does this fails to recognize how damaging such instigation can be.

Why? Two reasons. First, this instigation produces nationwide images of a Ferguson full of looters and rioters reinforce the stereotypical views of “angry black protesters” that some on the police force (and others in America) may have. Second, it directly harms Ferguson’s economy and infrastructure.

While there have been many protesters who have voiced their dismay at watching the initially peaceful demonstrations devolve into violent, chaotic situations—such as this morning’s shooting and last year’s looting—unfortunately, for all the numerous peaceful protesters, there are bound to be some who become confrontational, especially where the issues of racial bias and use of force are concerned. And so Ferguson conjured up images of Los Angeles in 1992.

While it is too early to say much about the motives behind this morning’s shooting, it is my sincere hope that this time around, violence will not escalate further, and that someone with substantial public influence, prominence and visibility states that the last thing the citizens of Ferguson need is any outside agitators egging them on and promoting a mass social uprising against law enforcement.