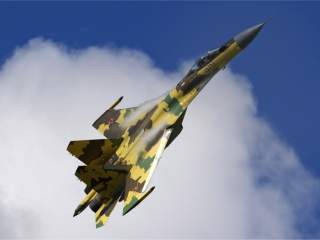 Russia has deployed at least four advanced Sukhoi Su-35S Flanker-E aircraft to Syria, beefing up its air superiority capabilities in the war-torn region.

The move follows protests from Turkey that a Russian Sukhoi Su-34 Fullback bomber violated its airspace on Friday—a claim Moscow denies. In an earlier incident in November, Ankara shot down a Russia Su-24 Fencer that had crossed the Turkish border for about eighteen seconds. Following that incident, Moscow deployed the power S-400 air and missile defense system to Syria and started to arm its fighters with live air-to-air missiles.

The addition of the Su-35 provides Russia with more fighter escorts for its fleet of Su-24 Fencer and Su-25 Frogfoot strike aircraft that are operating from the Khmeimim air base, which is located in Syria’s northwestern Latakia province. Those aircraft have minimal air-to-air self-defense capability and are reliant on the Sukhoi Su-30SM and Su-27SM3 Flankers currently in theatre for protection. Russia has also deployed fourteen Su-34 Fullback bombers to Syria, but those warplanes have a significant air-to-air self-defense capability.

It’s not clear how many air superiority aircraft Russia currently has deployed to Syria. Prior to the arrival of the Su-35s, the most capable Russian air superiority fighters in the region were four Su-30SM Flanker-H aircraft. Indeed, while not quite as sprightly due to their greater weight, drag, less powerful engines and somewhat less capable avionics, the Su-30SM is nonetheless an overall more capable system compared to the Su-35 due to the presence of a second crew member. The addition of the weapons system officer helps to ease crew workload during complex air operations.

While there are four Su-30SMs at Latakia, Russia has not disclosed how many Su-27SM3 aircraft are present in Syria. The Russian defense ministry has generally described the number alternatively as a “flight” or squadron, but it has not given a precise number. Nonetheless, the upgraded Su-27SM3 is a formidable warplane—roughly comparable to an upgraded Boeing F-15C Eagle.

While the Su-30SM and Su-27SM3 are capable warplanes, the Su-35 incorporates the latest Russian technology. Overall, U.S. defense officials are quite impressed with this latest Flanker variant. “It’s a great airplane and very dangerous, especially if they make a lot of them,” one senior U.S. military official with extensive experience on fifth-generation fighters told me some time ago. “I think even an AESA [active electronically scanned array-radar equipped F-15C] Eagle and [Boeing F/A-18E/F] Super Hornet would both have their hands full.”

The Syrian deployment will allow the Russian air force to gain valuable operational experience on the Su-35—even if four warplanes don’t add a decisive material value to the fight. Deploying the Su-35 to Syria also serves as a marketing tool for the formidable warplane. Moscow has sold the jet to China and hopes to secure further orders for the new fighter. Demonstrated combat experience in Syria should help with that goal.