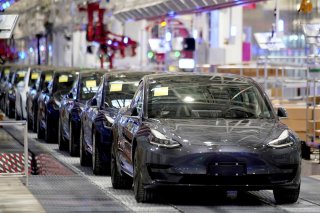 Over the weekend, Tesla CEO Elon Musk tweeted congratulations to Giga Shanghai in China on manufacturing the facility’s one-millionth car while also noting that “Total Teslas made now over 3M.”

The company had announced in July that its Fremont factory in California had produced its two millionth car.

Musk had confirmed its three millionth car built on its most recent earnings call.

“In the (hopefully unlikely) event that Twitter forces this deal to close *and* some equity partners don’t come through, it is important to avoid an emergency sale of Tesla stock,” Musk tweeted by way of explanation for the stock sale. Following the stock sale, per CNN, Musk owns 155 million company shares with the recently sold shares making up a small percentage of what he owns.

It was Musk’s second big stock sale of the year, with the first coming in April, around the time of Musk’s agreement to purchase Twitter.

That deal has since gone sideways, with Musk announcing his intention to exit the deal and Twitter making clear that it wishes to hold Musk to the deal. This summer, Twitter sued Musk over the deal, in Delaware Chancery Court, and the case is scheduled to come to trial in October.

“This is the last thing Tesla investors wanted to see,” said Daniel Ives of Wedbush Securities said in a note last week, in reference to the sales. “The biggest fear has been that Musk sells more stock, and that’s what just happened. It’s a near-term gut punch. There’s no explanation and that adds to the uncertainty.”

“Tesla’s major deployment of so-called Full Self-Driving (FSD) technology is one of the most dangerous and irresponsible actions by a car company in decades,” Nader’s statement said. “Tesla should have never put this technology in its vehicles. Now over 100,000 Tesla owners are currently using technology that research shows malfunctions every eight minutes…I am calling on federal regulators to act immediately to prevent the growing deaths and injuries from Tesla manslaughtering crashes with this technology.”