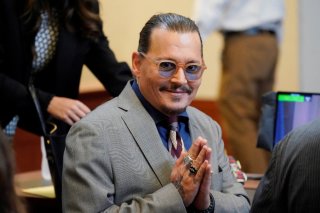 The ongoing trial in Virginia between actors and former spouses Johnny Depp and Amber Heard has been the spring’s most prominent celebrity news story. The two actors are accusing one another of defamation, with Depp seeking $50 million and Heard countersuing for $100 million, claiming that Depp had defamed her when he claimed the accusations were false. At issue is an article that Heard authored for the Washington Post in 2018 in which she accused Depp of violence.

The trial has received extensive coverage by the news media and social media, with YouTube and TikTok especially hosting a massive amount of content related to the case. If you’ve logged on to any social media network recently, you’ve likely seen a video about the trial, even if you haven’t engaged with any content related to it.

Some believe there may be a nefarious reason for all of the Depp-Heard content flooding social media.

Robert Evans, an investigative journalist who works with Bellingcat, tweeted last week that something appears off with the amount of Depp content on social media sites.

“There is something unsettling going on with the Depp / Heard trial that has not been fully sussed out. I have never in my life online been so relentlessly pushed to watch videos on a subject, despite never having clicked on a single one,” Evans said.

“The push to get people to watch videos specifically attacking Heard and pumping up Depp's ‘hilarious’ responses is not quite like anything else I've seen online.”

The implication is that Depp’s team, or someone close to it—possibly even a supportive fan—may have hired a firm to manipulate search results and push content on social media apps. This is, however, only a circumstantial assumption that remains unsubstantiated. An alternative hypothesis is that social media companies know the topic is of great interest and have therefore chosen to amplify it.

A few days later, a Vice report found that the conservative news website the Daily Wire had spent $35,000 to promote articles about the Depp-Heard trial on social media, including on Facebook and Instagram. But that is not an explanation for the ubiquity of such videos, as the Daily Wire was presumably promoting its own articles.

Axios reported last week that the Depp-Heard trial has earned more social media interactions per published article than any other topic in the news, with runners-up including Elon Musk, President Joe Biden, abortion, the Russo-Ukrainian War, inflation, and COVID-19.