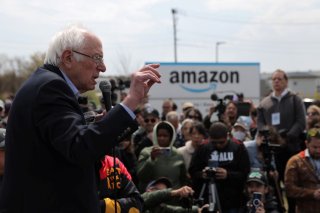 Bernie Sanders is right: American taxpayers deserve stock or warrants in Intel and other semiconductor companies if they receive federal financial assistance through the $52 billion CHIPS Act legislation currently under consideration by Congress.

It is clear that we need to ramp up chip fabrication essential to America’s economic and national security. But as Congress seeks agreement on legislation to compete with China, it should be skeptical lest it turns into a “corporate boondoggle.” For too long, businesses have received financial support provided by taxpayers while receiving nothing in return. If private companies are going to benefit from taxpayer subsidies, the financial gains made by these companies should be shared with the American people.

This is the opposite of socialism; instead, it expands capitalism while dramatically broadening shared ownership. It will also make private companies think twice before seeking federal subsidies, and that alone is a good result.

For example, in early 2010, Tesla received a $465 million loan from the Advanced Technology Vehicle Manufacturing (ATVM), a program that was signed into law by then-President George W. Bush. Unfortunately, the federal government did not ask for nor receive any equity or stock warrants in Tesla for offering this sizable loan.

This was very unfortunate because about two months later in June 2010, Tesla went public with shares initially priced at $17. Now Tesla shares trade over $1,000 a share. Good for Elon Musk but a missed opportunity for American taxpayers.

Although Tesla finished paying off the loan in 2013, there would have been huge profits for taxpayers having a stake in Tesla stock or warrants. These profits could have eventually made their way to the Social Security or Medicare Trust Fund.

While a strong supporter of expanding capitalism and the free market, in some situations, private investors hesitate to invest in strategic areas critical to America’s economic and national security. This may be because of lower near-term expected returns on investments requiring significant upfront capital or skepticism for highly-speculative leapfrog technologies.

There is no doubt that the federal government has a poor record in picking companies and a mixed record in picking sectors. So in evaluating potential federal support for strategically important areas in economic and national security, technical skill, skepticism, and independent judgment are essential.

Intel recently announced it had selected Ohio for a new semiconductor manufacturing operation that would cost at least $20 billion in an effort to increase U.S. production of computer chips. President Joe Biden has recently met with Intel CEO Patrick Gelsinger at the White House to discuss the project and the need for taxpayer-funded subsidies.

Critics of using taxpayer funds to support private U.S. semiconductors companies like Intel or Texas Instruments point out that the industry has closed down hundreds of manufacturing plants in the United States resulting in the loss of substantial American jobs over the last two decades as these companies moved most of its production overseas. In addition, last year, Intel made almost $20 billion in profits and spent $14.2 billion during the pandemic not on expanding production or research, but rather on buying back its own stock to reward its executives and shareholders.

As representatives of the American taxpayer, Congress should demand stock or warrants for extending taxpayer financial assistance to private companies. This is not a revolutionary idea. These conditions were imposed on corporations that received taxpayer assistance in the bipartisan CARES Act, which passed the Senate ninety-six to zero. Likewise, during the 2008 global financial crisis, Congress required all companies taking Troubled Assets Relief Program (TARP) funds to issue warrants and equity stakes to the Federal Government. In the same spirit, this capital should go directly into the Social Security Trust Fund.

Ironically, we can learn from the founding of Taiwan Semiconductor Manufacturing Company (TSMC), now the world’s leader in producing microchips with complete domination of high performance microchips. It was formed in 1987 when the Taiwanese government persuaded the Dutch multinational Philips to partner alongside several local, private firms to start a chip foundry. The Taiwanese government invested 21 perncet of the start-up capital, Philips contributed 28 percent, and other private investors provided the rest.

Both Intel and Texas Instruments were invited to invest in TSMC at its founding but declined to participate.

The founding CEO of Taiwan Semiconductor, Morris Chang, was born in China but became an American citizen. He earned two engineering degrees from the Massachusetts Institute of Technology, and then spent a quarter-century working at Texas Instruments, with responsibility for its worldwide semiconductor business. Texas Instruments also sent him to Stanford University, where he was awarded his doctorate in electrical engineering. Then in 1983 at the age of fifty-two, Chang was passed up for a top job and left Texas Instruments. The government of Taiwan came calling, and the rest is history.

In 1997, Taiwan Semiconductor listed its stock on the New York Stock Exchange and now has a market value over $500 billion. The company also makes 12 million semiconductor wafers a year and has over 50,000 employees.

So as Intel and other American semiconductor companies maneuver for federal money to subsidize new fabrication technology and facilities, Congress should make sure that any federal money is closely tied to stock so that all Americans have the potential to profit together.

Carl Delfeld is president of the non-partisan Economic Security Council, was a consultant to the U.S. Treasury and U.S. Joint Economic Committee, and is author of a new book Power Rivals: America and China’s Superpower Struggle.