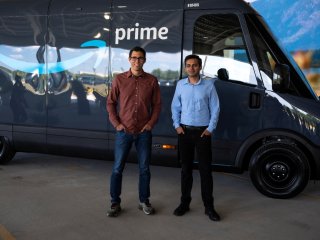 Amazon on Wednesday held a massive event to tout new hardware products ahead of the Prime Early Access event, which will take place October 11 and 12.

Some highlights of what Amazon announced on Wednesday:

Amazon announced an upgrade of Fire TV, with the new Third Generation Fire TV Cube and new Alexa Voice Remote Pro. The new Fire TV Cube is touted by the company as “the first streaming media player in the industry with an HDMI input port and Wi-Fi 6E support.”

“This Fire TV Cube’s powerful processing and Wi-Fi 6E support deliver an incredibly smooth streaming experience, and HDMI input means you can instantly extend the simplicity of Fire TV and hands-free Alexa control to your home entertainment system. With Alexa Voice Remote Pro, we’re making it easy to find a misplaced remote and get to the apps and content you love,” Daniel Rausch, vice president of Amazon Entertainment Devices and Services, said in the announcement. The Fire TV Cube is available for preorder for $139.99, while the Voice Remote Pro goes for $34.99.

“A true ambient experience is there to simplify your day-to-day life when you need it and fades into the background when you don’t. This generation of Echo devices are designed with this vision in mind,” Nedim Fresko, vice president of Amazon Alexa Devices, said in the announcement. “With the upgraded audio and compact form factors, each of these new devices gives customers more ways to make Alexa a seamless part of their day. And, with the new sensors and technology built in to Echo Dot and Echo Dot with Clock, customers can have Alexa do even more on their behalf.”

On the Kindle front, Amazon has announced the Kindle Scribe, touted as the first Kindle device that allows for both reading and writing. The 10.2-inch, 300 pixels per inch (ppi) screened-device comes with a pen that does not require charging.

“Kindle Scribe is the best Kindle we’ve ever built, creating a reading and writing experience that feels like real paper,” Kevin Keith, vice president of Amazon Devices, said in the release. “It's inspired by the Kindle customers who have added billions of notes and highlights to books over the years, and it’s also ideal for reviewing and marking up documents, managing your to-do list, or doodling over a big idea. Plus, it offers all the Kindle benefits customers know and love—millions of books on demand, adjustable fonts, premium reading features, and weeks and weeks of battery life—with the benefit of a beautiful, large display.”

Also announced by Amazon on Wednesday was the Halo Rise, a bedside sleep tracker. It will sell for $139.99, along with six months of Halo membership.

“Quality sleep is an incredibly important factor in our overall health and well-being. In today’s busy world, getting more and better sleep is one of the areas that customers ask us about the most, which is why we’re tackling sleep head on,” Melissa Cha, vice president of Amazon Smart Home and Health, said in the release. “Halo Rise is designed to work intelligently in the background and give you an entirely new and effortless way to manage your sleep and achieve sleep-life harmony.” It will ship later this year.

And finally, Amazon announced a new lineup of QLED TVs. It’s called the Fire TV Omni QLED Series, and it features 4K displays. The lineup consists of a  sixty-five-inch version for $799.99 and a seventy-five-inch model for $1,099.99.

The TV is run through the Fire TV Ambient Experience, as well as hands-free Alexa capability. Many previous in-house TVs produced by Amazon have been on the lower end, but this lineup features Dolby Vision IQ and HDR10+ Adaptive capability.

“We’ve all been buying so-called smart TVs for decades, but they’re really not all that smart—and for much of the day, they’re not beautiful or useful either,” Daniel Rausch, vice president of Amazon Entertainment Devices and Services, said in the release. “The Omni QLED Series delivers stunning artwork, glanceable information, hands-free controls, and so much more–it reimagines what customers can expect from a smart TV.”