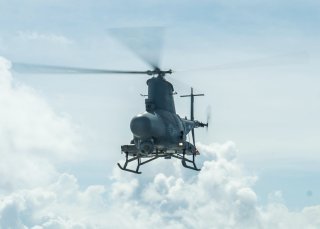 In the wake of House Speaker Nancy Pelosi’s visit to Taiwan, Chinese warships and aircraft conducted a series of drills surrounding the island. Beijing’s goal was clear: demonstrate the Chinese Communist Party’s (CCP) ability and willingness to isolate and coerce Taiwan into submission through a fait accompli blockade. Meanwhile, the U.S. Army is facing a severe recruitment crisis. This problem is not an anomaly confined to one branch of the U.S. military but the result of cultural and economic shifts within American society. There are no quick fixes for addressing the services’ staffing shortages and the impact of this issue will likely increase over the rest of the decade without a systemic change in talent management. Still, today Congress can play a central role in helping the Department of Defense mitigate this risk in the mid-term by making strategic investments to accelerate the development of automated and autonomous systems.

Thought leaders like former National Security Advisor H.R. McMaster and former Under Secretary of Defense for Policy Michéle Flournoy have argued that technological superiority will determine the winner of the strategic competition between the United States and China. While Congress and the Department of Defense have made admirable progress in addressing many cultural and policy obstacles to innovation, progress is still too slow. According to the National Security Commission on Artificial Intelligence’s final report, China is poised to overtake the United States in artificial intelligence (AI) dominance. This will erode the United States’ ability to deter aggression against Taiwan and other partners.

Autonomous systems give commanders many potential advantages over a less-technologically advanced adversary. Through collaborative operations in all domains, human-machine teams can conduct critical missions together, including reconnaissance, targeting, and logistics. As such, these teams represent an economy of force that allows commanders to prioritize the use of their service members for other tasks. Autonomous systems also enable the operationalization of the Joint All-Domain Command and Control (JADC2) concept. Data collected through distributed and networked platforms enhances situational awareness and allows commanders to make decisions faster than their adversaries.

While the Department of Defense and its industry partners are already developing autonomous systems, they are not doing so at the speed and scale needed to achieve a comparative advantage over adversaries operating in Eastern Europe and the Indo-Pacific. Although each service is developing its next-generation autonomous family of systems, history shows that independent development efforts will likely be disjointed and slow. This increases the risk to the Joint Force that its autonomous platforms will not work together seamlessly. It will also drive up the cost of live testing autonomous systems from different services, especially when they are not complemented by virtual testing and evaluation.

The good news is that Congress can help accelerate the maturation of these technical and operational concepts by expanding investments in technologies that accelerate the development of autonomous programs across all the services. For example, Congress can direct the establishment of an enterprise data management program that supports all the services. As we have seen firsthand in the commercial sector, a robust data management program is the foundation of successful autonomous system development and deployment programs. Our British allies understand this well. The United Kingdom’s Ministry of Defence (MOD) is incorporating data management skills as part of its Human Machine Teaming (HMT) program.

Congress can also expand investments in centers of higher learning, including in historically black colleges and universities, to conduct research in autonomous vehicle technology. These institutions give the Department of Defense and dual-use technology companies another focal point for focused collaboration on key national security autonomy problems. They also serve as incubators for workforce development in strategic industries by developing solutions to challenging problems across critical sectors such as defense, agriculture, and transportation.

Technological advances alone are insufficient to solve the United States’ national security challenges, such as recruitment shortfalls. This will require robust bipartisan leadership in Congress to implement sustainable long-term policies that will attract strong, smart, and tech-savvy citizens to serve. However, accelerating the fielding of autonomous technologies will allow the United States to optimize its existing force structure while stepping up the development of future operational concepts. A failure to meet the moment will mean that the People’s Liberation Army will become a technological near-peer competitor to the United States military.

Nicholas Kazvini-Gore serves as Director of Federal Affairs at Applied Intuition. Previously, he served as national security advisor to Rep. Marcy Kaptur, a senior Member of the Defense Appropriations Subcommittee.

John Mark Wilson serves as Director of Strategy and Communications at Applied Intuition.  He served as an officer in the United States Army for 24 years and in the National Security Council as a director of strategic communications.