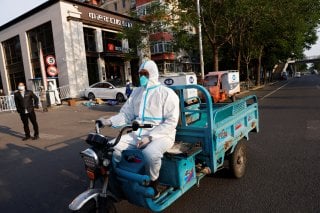 The year 2022 may be almost over, but we’re sadly not done yet with COVID-19 disrupting supply chains.

That’s the case right now in China, and it may affect the availability of some of this fall’s iPhone lineup, Apple announced over the weekend.

“COVID-19 restrictions have temporarily impacted the primary iPhone 14 Pro and iPhone 14 Pro Max assembly facility located in Zhengzhou, China. The facility is currently operating at a significantly reduced capacity. As we have done throughout the COVID-19 pandemic, we are prioritizing the health and safety of the workers in our supply chain,” Apple said.

“We are working closely with our supplier to return to normal production levels while ensuring the health and safety of every worker.”

The iPhone 14 Pro and Pro Max are two of the four phones released this fall as part of the company’s latest iPhone lineup.  The other two iPhone models introduced earlier this fall are the iPhone 14 and iPhone 14 Plus.

CNN reported last week that employees of the Foxconn assembly factory have been “fleeing” the locked-down facility in Zhengzhou, which is the largest iPhone assembly plant in the world.

“[We] fully understand your eagerness to go back home,” a Zhengzhou government official said on WeChat, as reported by CNN. “For employees who voluntarily stay in the company’s factory area, the port government and the company will jointly ensure everyone’s…health and safety.”

“At present, because now is the peak production season… [there is] a large demand for workers,” a Foxconn official said in a statement.

Ivan Lam, a senior research analyst at Counterpoint, told CNN that between 10 and 30 percent of the iPhone lineup’s production would be affected in the short term.

“I think in one to two weeks, things will get back to normal, given the current status,” Lam said, per CNN. “They still have a lot of alternative production sites… Things are under control now.”