China’s Plans for Cyberspace Are All About Domestic Control 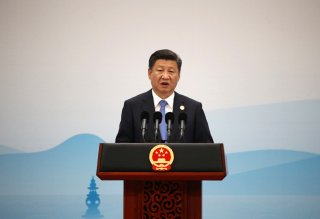 On November 7, 2022, the Chinese State Council of Information Office released a white paper titled “Jointly Build a Community With a Shared Future in Cyberspace,” emphasizing a vision of internet governance in the new era. The white paper reflected China’s concern about “the threat of cyber-hegemonism”—that certain states can employ digital and information technology to interfere in other nations' internal affairs and undertake large-scale cyber surveillance, posing a threat to a regime’s survival. The white paper thus revealed the Chinese government’s effort to control cyberspace policy narratives.

The growth of the internet has presented an existential threat to the Chinese Communist Party (CCP) by creating a new space for online public discussions. According to Data Reportal, the number of internet users in China jumped by 35.9 million between 2021 and 2022, allowing 70.9 percent of the total population to achieve internet access at the beginning of 2022. Now, the growing use of the internet could interfere with the Chinese government’s control over society. The CCP thus incorporated cybersecurity issues into its national security doctrines. As President Xi Jinping asserted in his speech at the National Cybersecurity and Informatization Work Conference in 2018, “without cybersecurity, there is no national security, the economy and society will not operate in a stable manner.” He further stressed that “we can absolutely not let the internet become a platform for the dissemination of harmful information, or a place where rumors spread that create trouble.” Ahead of the 2018 Conference, in 2017, the Chinese government released its “International Strategy of Cooperation on Cyberspace,” which proposed international cooperation among countries in creating new treaties and measures to foster “cyber sovereignty,” a development that would allow the Chinese government to regulate online content. These concerns culminated in the Chinese government’s release of its 2019 white paper concerning cybersecurity, which declared that “cybersecurity remains a global challenge and poses a severe threat to China.”

More recently, in a 2022 white paper, the Chinese government called for international cooperation under the name of “a community with a shared future in cyberspace.” This narrative remains quite ambiguous to the international community. From a Chinese perspective, Yuwen Li, a professor at Peking University, notes that the understanding of a community with a shared future implies that the CCP is attempting to integrate Chinese cultural ideas into global governance—inextricably linking the development of the modern world to such ideas. Western scholars, however, see things differently. Andrew Nathan and Boshu Zang, professors at Columbia University, argue that China’s policy rhetoric of cooperation within a community reveals the Chinese government’s attempt to conceal its self-centered strategic incentives. The white paper’s assertions about “the important concept of building a community with a shared future in cyberspace” and “the CCP’s commitment to contributing to human progress and world harmony” are surface-level comments.

The 2022 white paper illustrates the ambitious nature of China’s guiding propaganda and suggests that Xi is deliberately becoming more aggressive in seizing control of cyberspace policy narratives. Specifically, the rhetoric of a community with a shared future in cyberspace is cooperative in theory but assertive in practice. China tried to present itself as a supporter of “global governance based on extensive consultation, joint contribution, and shared benefits,” and urged that “the international community should be encouraged to expand pragmatic cooperation and jointly deal with associated risks and challenges.” The Chinese government also reassured other states that “the goal of building a community with a shared future in cyberspace conforms to the development of the information age and meets the needs and expectations of people throughout the world.” Nevertheless, China’s long-term strategic priorities over cyberspace include preserving social stability and the CCP’s political control through advanced information technology, with the white paper stressing that “the Party’s voice is spreading faster, farther, and wider, and becoming the strongest on the internet in China, and winning wide popular support.” Particularly, under General-Secretary Xi, the CCP has cast doubt on some countries’ efforts “to decouple with others, and create schism and confrontation in cyberspace, and vowed that “it is taking action against unfair competition by some platforms which abuse their strength in data and technology.”

The recurrent phrase of a community with a shared future has become Xi’s foreign policy signature across domains, and in cyberspace policy in particular. This narrative could be seen as reflective of Xi’s global outlook on a win-win model with respect to mutual collaboration in cyberspace.

However, such rhetoric serves as an instrument to nourish the international public’s belief in the Chinese notion of commonality. Furthermore, the narrative’s purpose is to foster the trust of the domestic public with virtuous arguments on world harmony, allowing the CCP to subtly issue strict regulations on cyberspace governance. Therefore, the rhetoric of a community with a shared future in cyberspace assists the CCP’s domestic objective of eliminating foreign threats to China’s internal affairs. The Chinese government also seeks to reinforce the norm of cyber sovereignty. The 2022 white paper highlighted, consistent with this aim, that “all countries have the right to formulate public policies, laws, and regulations on cyberspace in the context of their national conditions and international experience. No country should seek cyber hegemony; use the internet to interfere in other countries’ internal affairs; engage in, incite, or support cyber activities that endanger other countries’ national security, or infringe on other countries’ key information infrastructure.”

On the surface, the rhetoric of a community with a shared future in cyberspace may seem like an effort to promote China’s benign perspective of cyberspace cooperation on a global scale. Yet, underlying this global vision is China’s ambition to safeguard domestic stability and bolster the CCP’s grip on cyberspace governance.