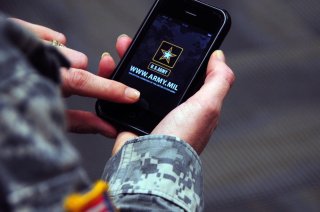 In recent months, the U.S. Army has been working to roll out a system allowing soldiers and civilian employees to use their mobile devices to connect to government systems.

Federal News Network reported in August that the Army had been testing its bring-your-own-device strategy (BYOD) since 2021 and was preparing to roll it out.

“Much like you do in the commercial sector, you can now use your personal device, but we will put a secure capability on it that allows you to log back into the Army network and conduct official business,” Lt. Gen. John Morrison, the Army’s deputy chief of staff for command, control, communications, cyber operations, and networks, told the press in August.

“Think of the operational effectiveness that will come with that, and think of the possible economic or fiscal efficiencies that we potentially could get.”

According to Defense One, under the new system, “data isn’t stored on the device itself, but rather pixels are streamed in, with the data remaining in the cloud.”

The pilot initially focused on National Guard and Army Reserve, with active duty soldiers next.

“The way that we generally approach this is that we start by onboarding what we call ‘champions,’ and those are both technical users and just regular users,” Morrison said in August, per the Federal News Network story.

“The reason we do that, and we learned this when we were implementing Army 365, is it produces just amazing tactics, techniques and procedures we can use when we start doing the broader onboarding. It really just makes it so much easier.”

Raj Iyer, Ph.D., the chief information officer of the Army, said in a LinkedIn post this week that the system was live, calling it “a good day for the Army.”

“Army BYOD is here! I made my first Teams call using my personal phone today with the wonderful Lily Zeleke, Deputy DOD CIO who has been a great partner enabling Army success,” Iyer said in the post. “The call was flawless with no degradation in video quality even though the Hypori Halo app is streaming pixels from the cARMY cloud to the mobile device. Over the next few days I will continue to test and provide updates on how well its working. It’s been almost eighteen months since the DOD sunset CVR leaving our users without BYOD capability.”

In response, one Army veteran asked Dr. Iyer what privacy rights soldiers would lose in using that service.

“Easy answer - none,” he said. “Happy to share the End User Agreement that you sign for the pilot. That is what took us so much time to test and validate.”