Does Biden Care About China’s Theft of American Technology? 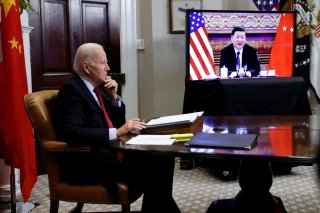 Depending on one’s biases, the Biden administration has done either too much of one thing or too little of another. One area where it has done nothing is in protecting U.S. interests in trade with China. Though President Joe Biden has kept Donald Trump’s questionable tariffs in place, he has not lifted a finger to stem China’s ongoing theft of American technology and intellectual property. Indeed, the administration has obliquely, if inadvertently encouraged China to continue such practices.

Every nation, and every business, tries to get its competitors’ trade secrets and technological edges. That is why governments and international agreements enforce patents and copyrights as well as recognized trademarks. Because Beijing has largely ignored these international norms and laws, businesses have turned to Washington for help instead of to courts and international agencies. Washington’s past efforts have failed to give this protection, but at least previous administrations have tried. The Biden White House cannot even make that claim.

Beijing relies on a number of techniques to gather the fruits of American innovation. Chief among these is China’s insistence that any U.S. firm operating in China have a Chinese partner to which it must transfer all its technology and trade secrets. Though not strictly illegal, Beijing’s insistence does fly in the face of international norms. Less licit is how Chinese firms buy high-tech American equipment and, despite patent protections, reproduce it for use in China and elsewhere outside the United States. American firms complain that knockoffs of their designs appear under Chinese labels all over the world.

Cyber theft is also prevalent. A long list of American companies has documented cyber-attacks by Chinese agents, usually connected with the government. The so-called Operation Aurora managed what Google tech executives described as a “highly sophisticated and targeted attack on its corporate infrastructure” as well as an invasion of the Gmail accounts of Chinese human rights advocates. At least thirty-four American firms reported similar Operation Aurora attacks, including Yahoo, Adobe, Northrup Grumman, Dow Chemical, and McAfee. Another operation, run by China’s Ministry of State Security and dubbed Cloudhopper, compromised IBM and Hewlett Packard among others, and through them their clients, including the federal bureaucracy. The AFL-CIO suffered a separate attack.

Beijing has enticed individuals in the United States into more old-fashioned espionage efforts. The Bureau of Immigration and Naturalization records numerous instances of Chinese traveling to the United States as students when in fact they hold commissions in the People’s Liberation Army and have been tasked with spying on academic research. China’s “Thousand Talents Plan” uses all sorts of incentives to induce people working in this country to give Beijing their employer’s technologies and other valuable pieces of intellectual property, sometimes even when these people are working on U.S. government grants, as was true in the famous case of Harvard professor Charles Lieber.

FBI documents make clear that the array of reports and complaints coming out of business are neither fabricated nor exaggerated. The DOJ has stated bluntly that some 80 percent of all its economic espionage prosecutions connect to China. Only a few months ago, FBI director Christopher Wray revealed that his bureau has more than 2,000 open cases of Chinese espionage and opens a new case every 12 hours. “There is just no country,” Wray said, “that presents a broader threat to our ideas, our innovation, and our economic security than China.” Effectively putting a figure on the damage to which Wray alludes, Michael Orlando, director of the National Counterintelligence and Security Center (NCSC), estimates that China’s theft of technology and other intellectual property costs American businesses a minimum of $200 billion a year. That is just the market value of what is lost. When adding the sales losses involved, the Center’s estimate rises to $600 billion a year.

As already indicated, this is an old story. Every president for almost forty years has responded to complaints by business and tried to get Beijing to change its ways. None have had much success. Ronald Reagan made the first attempt in 1986. He placed his efforts to stop Chinese theft of patents and copyrights under the auspices of the World Trade Organization’s (WTO) Trading-Related Aspects of Intellectual Property Rights Agreement (TRIPS). It so failed that Bill Clinton had to revisit the matter in 1995. Testifying to Clinton’s lack of success was the need for George W. Bush to revisit the matter in 2006. Bush stepped away from the WTO to establish what he and Chinese president Hu Jintao called the “Strategic Economic Dialogue.” When it, too, failed to stop Chinese theft and bullying, Barack Obama had to revisit the matter in 2015. That effort also failed. In part because of continued Chinese bullying and outright theft, Trump controversially imposed a broad array of tariffs on Chinese imports. Under the so-called “Phase 1” of the ensuing agreement between Washington and Beijing, China promised among other things to streamline procedures for Americans to protect their patent rights from Chinese infringements.

By the time Biden took office, it was again clear that despite the Phase 1 agreement China had continued as it had for years. Deputy U.S. Trade Representative (USTR) Sarah Bianchi stated bluntly that China had failed to fulfill the promises it made in the Phase 1 agreement. And for that reason, she announced that the Trump tariffs would remain in force.

But the administration has done nothing more. On the contrary, Bianchi, even as she documented China’s failure to meet its promises, also made clear that the USTR and the Biden White House had no desire to “escalate,” a comment that effectively told Beijing it had little to worry about. No new initiatives appear on either the White House or the USTR’s websites, where they would appear if any existed. In other respects, the administration has actually eased the pressure on Beijing. The Department of Justice decided to close its so-called “China initiative” that aimed specifically at combating Chinese espionage and cyber threats. More recently, the White House has floated the idea of lifting the tariffs on Chinese goods. This action aims at easing inflation, but it also would remove any pressure on Beijing to comply with American demands. More telling is how the White House made no comment when a Chinese court recently declared, in clear defiance of international norms, that no Chinese firm was libel to suit for the theft of technology anywhere in the world.

After so many years of bipartisan failure in this matter, it was never realistic to expect much from any new administration. What is strange, however, is how this administration has not even tried to ease this burden on American business. When new evidence of theft arrives—perhaps from some of the thousands of cases to which Director Wray alluded—the president may deflect blame by pointing to the failures of his predecessors, but at least they tried.

Milton Ezrati is a contributing editor at the National Interest, an affiliate of the Center for the Study of Human Capital at the University at Buffalo (SUNY), and chief economist for Vested, the New York-based communications firm. His latest books are Thirty Tomorrows: The Next Three Decades of Globalization, Demographics, and How We Will Live and Bite-Sized Investing.