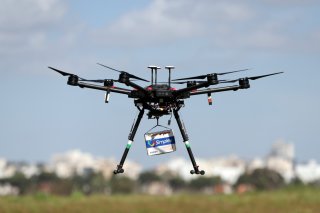 “These are effectively drones but there’s no reason that they can’t be used as delivery vehicles,” Bezos said in the segment. “We’re talking about delivery. There’s an item going into the vehicle. I know this looks like science fiction. It’s not.”

Bezos had touted the functionality, at the time, as four or five years away. But it’s taken a bit longer than that, with Amazon being one of ten companies that received licenses to do so from the government in 2020.

According to CNBC, Amazon drones are now set for launch. Per the report, the MK27-2 drone will drop packages from twelve feet in the air. It will launch later this year in Lockeford, California, and College Station, Texas. The drone is a different updated model from the one that was first introduced back in 2013.

“If the drone encounters another aircraft when it’s flying, it’ll fly around that other aircraft. If, when it gets to its delivery location, your dog runs underneath the drone, we won’t deliver the package,” Calsee Hendrickson, who leads product and program management for the Prime Air drone program, said in the CNBC story.

“We like to refer to the drone as being independently safe, which means that it has the power to make the decision. It saw something that had a heat signature underneath the drone and was able to not deliver a package and return back to the station. But the drones do have an operator in command that is overseeing the entire airspace.”

The report said that “thousands” of items will be available for launch but it’s not clear how soon Amazon plans to widely introduce the program.

“We’ve made sure that all of those products are both capable of being okay when they are delivered, and our packaging, which is displayed behind me as well, is a special packaging that ensures that the integrity of the product is still intact after the delivery,” Hendrickson told CNBC.

Also, the New York Times reported this week that Amazon is planning to enact major layoffs in the near future. The company had already announced a hiring pause for the next few months.

“We’re facing an unusual macro-economic environment, and want to balance our hiring and investments with being thoughtful about this economy. This is not the first time that we’ve faced uncertain and challenging economies in our past,” Amazon’s Beth Galetti said in a blog post last week.

“While we have had several years where we’ve expanded our headcount broadly, there have also been several years where we’ve tightened our belt and were more streamlined in how many people we added. With fewer people to hire this moment, this should give each team an opportunity to further prioritize what matters most to customers and the business, and to be more productive.”