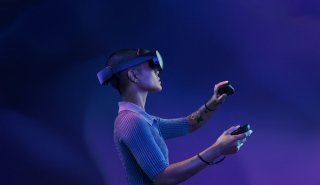 This week, almost a year after the company formerly known as Facebook was pivoting to become Meta, that company announced the arrival of its latest physical product, the Meta Quest Pro. Known earlier by the code name Project Cambria, the Meta Quest Pro is touted by the company as “a major leap forward for VR hardware,” on top of the already-existing Quest device.

“We believe VR devices will help usher in the next computing platform—becoming as ubiquitous as laptops and tablets are today—and that people will use them in their everyday lives to access the metaverse,” the company said. "With its cutting-edge technologies, Meta Quest Pro represents an important step toward that future. We designed it to expand the possibilities of both VR and mixed reality. And to do that, you need truly innovative hardware."

In addition, the company announced that it was partnering with Microsoft to bring Microsoft Teams and Windows 365 to the new device.

There have been no full-on reviews yet of the Meta Quest Pro, but some news outlets have looked at it first. Joanna Stern of the Wall Street Journal wrote about the device.

"On Tuesday—nearly a year after renaming Facebook Inc. as Meta Platforms Inc. to signal a focus on virtual worlds—the company announced the Quest Pro. The new virtual-reality headset has substantial improvements over the $400 Quest 2 headset, which will remain on sale. It’s more comfortable. It has better display quality and new controllers. And it tracks your eyes and your face, so your avatar can now make the same funny faces you do,” Stern wrote.

Stern also argued for calling the device a “face computer” instead of a headset.

“But this isn’t really about fun. Unlike other companies who casually throw around the ‘Pro’ label, Meta is really aiming this at professionals. The new features are for architects, engineers, and designers, along with early adopters who just want to move beyond flat screens. Meta is taking orders starting Tuesday, and said the headset will begin reaching customers on Oct. 25. The company will begin direct sales to businesses at a later date.”

Counterpoint Research on Wednesday argued that the device is more likely to appeal to enterprise users than gamers.

“To justify the steep price, the Quest Pro packs more features as well as a sleeker design than the Quest 2 (its optic stack is 40% slimmer). It has 10 advanced VR/MR sensors, spatial audio, pancake lenses, 256GB storage, 12GB RAM, and a new Snapdragon XR2+ processor. The Meta Quest Touch Pro controllers that accompany it have three cameras and Snapdragon 662 mobile processors,” Senior Analyst Harmeet Singh Walia said in a blog post.

“It also has a better display than the Quest 2’s, although, LCD displays (even if with 37% more PPI and 75% more contrast than Quest 2) may not signal value for money to users who will likely find superior displays in Apple’s upcoming MR device or Sony’s much cheaper PlayStation VR2.”