Need for Speed: These Are the Fastest Internet Providers of 2022 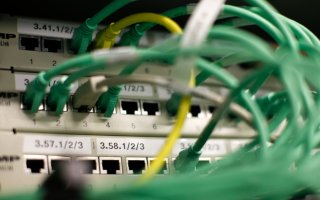 BroadbandNow has released its annual report, “The Fastest Internet Providers in America.” The results were obtained through more than 28 million speed tests conducted throughout the month of July.

However, using BroadbandNow’s “90th percentile” metric, Verizon was first with 544 Mbps, AT&T was second with 488 Mbps, Xfinity third with 442 Mbps, Spectrum fourth with 293, and T-Mobile fifth with 167.

When it came to the fastest local and regional providers, the winner was Stealth Communications, a company that provides fiber-based Internet in New York City. It was first in both the 90th percentile metric (with 4189 Mbps), and the maximum speed (7529 Mbps.) In the 90th percentile category, Sonic (in California) was second with 913, Pilot (also based in New York) third with 544, Google Fiber (in several cities) fourth with 532, and US Signal (based in Michigan) fifth with 506.

“The new lifeblood of the economy is data, and future economic growth will depend on our ability to transfer that data quickly. Fiber-optic cables and 5G wireless transmitters rank as high as oil pipelines in their importance to our way of life, and having a high-speed internet connection is essential,” BroadbandNow said.

“First, the median speed unfairly favors certain providers depending on their customer base. Companies that offer internet packages at a variety of speeds, or leverage a variety of technologies, may have a lower median because a large number of customers may choose slower plans to match their budget,” it said. “Providers that only offer one package, or that may only have commercial customers, will see a smaller impact on their median. The 90th percentile can also be affected by this, but it levels the playing field by focusing on customers who have bought high-speed packages.”

U.S. News, in its most recent rankings, had AT&T as the top Internet service provider, followed by Verizon, Xfinity, Cox, Spectrum, Mediacom, Astound, and Centurylink. Reviews.org, in their rankings, listed Xfinity as the “Best overall” Internet provider, Google Fiber as “fastest download speed,” Verizon Fios as “best for low latency,” and Cox Communications and Spectrum as “runner-up.”

“If you’re looking for the fastest Xfinity internet plan, check out the Gigabit Pro (or Gigabit X3 in the Northeast). Gigabit Pro offers 2,000 Mbps speeds, or you can drop down a tier and grab the Gigabit plan. We wouldn’t blame you, the Gigabit Pro’s monthly price of $299.95 is shocking,” the site said.