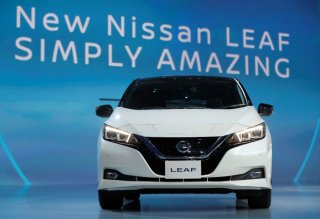 One of the first-ever mass-market electric cars will soon be discontinued. According to Automotive News, the Nissan Leaf is nearing the end of its run. The company “does not plan to bring out a next-generation Leaf and instead will replace it with a new model more tuned to the needs of the modern EV buyer.” According to the report, production of the Leaf will end “mid-decade.”

The Leaf debuted in 2010, and the report describes it as “a pioneering electric vehicle that the U.S. market was not ready for.” The Leaf arrived on the U.S. market more than a year before Tesla’s Model S. About 175,000 of the cars have been sold in the years that it’s been on the market, according to the report.  "With EVs projected to be 40 percent of Nissan's U.S. sales volume by 2030, we will offer a lineup of electric vehicles in a variety of segments to meet the growing demands of American customers," Nissan spokesman Brian Brockman told Automotive News. Brockman did not confirm or deny the end of the Leaf.

Speaking to The Verge, another Nissan spokesperson did not confirm or deny the move to kill the Leaf. “We are seeing renewed interest in LEAF with the increased demand for EVs and its overall value proposition,” Nissan spokesperson Stephen Oldham said in an email to The Verge. “Since its launch, LEAF has consistently delivered strong customer satisfaction and new buyers to Nissan,” Oldham added.

The Leaf was developed by Carlos Ghosn, Nissan’s controversial former CEO. After Ghosn was forced out of the company and brought up on criminal charges, he fled the country in late 2019, reportedly smuggled out of Japan in a musical instrument case. "He wanted to prove Nissan was not Toyota's little brother," a former Nissan executive said to Automotive News, referring to Nissan’s efforts to compete with Toyota’s then-new Prius hybrid. "Ghosn wanted to be a trailblazer; he wanted to be a first mover."

However, this does not mean that Nissan is getting out of the electric vehicle game. In fact, Nissan is planning to spend $18 billion to deliver fifteen battery-electric models by 2030. First up from that line is the Nissan Ariya, an SUV that is scheduled to arrive later this year with a starting price of $47,125.

“The Ariya's $47,125 starting price puts it above the Leaf and other affordable EVs but under the base price of the Model Y. We're of the mindset that to successfully switch from gasoline to electricity, range is key, so we'd stick with the entry-level Venture+ trim which boasts the longest driving range among the Ariya's four trim levels,” Car and Driver says of that model.