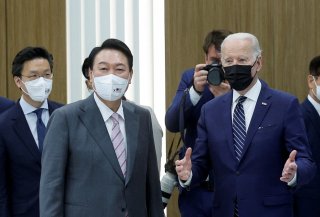 Last month, President Joe Biden made his inaugural journey to Asia as the US president. His first stop before traveling to Japan was in South Korea, where he began a three-day stay in the country by visiting Samsung Electronics’ semiconductor plant located not far from the U.S. military’s Osan Air Base in the city of Pyeongtaek, considered to be the largest in the world.

The factory was built in 2015 and has a size of 2.89 million square meters, which is equivalent to 400 football fields. It consists of two production lines for dynamic random-access memory (DRAM) and NAND flash memory chips and chip contract manufacturing. The third production line (that will be put into operation later this year) is the largest of the three and is expected to produce 14-nanometer DRAM chips.

“These little chips—only a few nanometers thick—are the key to propelling us into the next era of technological development,” Biden commented after touring Pyeongtaek’s campus. His statement best encapsulates the strong emphasis that the United States puts on the alliance that is crucial to securing critical supply chains and rebooting the country’s own manufacturing in order to successfully compete with China.

Notably, last November, Samsung announced plans to build a $17 billion semiconductor factory in Taylor, Texas, which will be modeled on the one in Pyeongtaek, and ready to use in the second half of 2024. This will add to the company’s presence in the United States, where it already has long operated a chip-making plant in Austin, established during the leadership of then-Governor George W. Bush.

Since Biden has recently asserted the United States does not want to be “dependent on countries that don’t share our values,” the Republic of Korea (ROK) seems to be its natural and critical partner to maintain an advantage in critical technologies of the future, including semiconductors and batteries.

In contrast, the U.S. share of global semiconductor manufacturing capacity currently accounts for 12 percent, down from 40 percent in 1990, according to the Congressional Research Service.

On top of that, as reported by the Semiconductor Industry Association, 75 percent of the world’s chip manufacturing is currently concentrated in East Asia and China, which is projected to have the world’s largest share of chip production by 2030.

Moreover, a new fab in the United States costs approximately 30 percent more to build and operate over ten years than in Taiwan, South Korea, Singapore, and 37-50 percent more than in China—with a 40-70 percent cost differential attributed to government incentives.

Keeping in mind that three-fourths of U.S. semiconductor imports came from Asia last year, the United States has no choice but to do what is in its capacity to support domestic production of chips, if it is serious about national security.

To achieve this goal, U.S. lawmakers from both chambers should agree as quickly as possible on the final version of a broader bill aimed at boosting Washington’s competitiveness vis-à-vis Beijing that includes around $52 billion in funding for expanding domestic semiconductor production and research and development.

Passing the CHIPS for America Act would strengthen U.S. semiconductor manufacturing and innovation and provide strong incentives for companies like Intel, Micron, or Samsung to build their future facilities not in Asia or Europe but in America. Hence this would help the country move away from its current “fables” model.

It is also worth noting that Taiwan is currently the primary source of the United States’ chip imports. TMSC alone delivers around 90 percent of the product to such tech giants like Google, Amazon, and Apple.

In the case of heightening tensions between China and Taiwan, this state of affairs is not only posing a grave threat to the commercial tech industry in the United States but also to its national security—something that is unacceptable in the long run.

Although China is still far behind Samsung and TMSC, the Middle Kingdom has made a tremendous effort in recent years to catch up with the top dogs in the chip industry. As far as electric cars are concerned, Beijing also has a big ambition of becoming the biggest electric vehicle market in the world, strategically encouraging the rise of domestic car and battery makers.

An ongoing global shortage of semiconductors has most notably impacted the automotive sector. Therefore, the recent announcement made by Stellantis and Samsung SDI concerning an investment of over $2.5 billion in building the automaker’s first U.S. electric-vehicle battery plant in Kokomo, Indiana, marks an excellent development for the country.

The joint venture is part of Stellantis’ goal to achieve annual sales of 5 million battery-electric vehicles by 2030, outlined in the “Dare Forward 2030” plan and Samsung Group’s investment of $356 billion over five years in strategic sectors. It aims to create 1,400 new jobs.

Furthermore, the world’s third-biggest automaker by vehicles sales, Hyundai Motor Group, has recently revealed its plan to invest more than $10 billion in the United States through to 2025, with $5.5 billion allocated for building its first dedicated fully electric vehicle (EV) and battery plant near Savannah, Georgia. This will create 8,100 new jobs.

Interestingly, in April this year, the company informed that it would spend $300 million to expand its assembly plant in Montgomery, Alabama, to build a hybrid version of the Santa Fe and the Electrified Genesis GV70, and create 200 new jobs.

Changes in international trade and supply chains are giving new impetus to the seventy-year alliance between the United States and South Korea, where cooperation in electric batteries and semiconductors became its new core. The “investing in each other” contributes not only to more resilient supply chains but also creates good-paying jobs for the American people—something that should serve as a litmus test for any such endeavor.

Adriel Kasonta is a London-based political risk consultant and lawyer.
He is a columnist with Asia Times, and his work has been published
in Forbes, National Review, the National Interest, The American Conservative, Antiwar.com, and South China Morning Post, to name a few. You can follow him
on Twitter @Adriel_Kasonta.