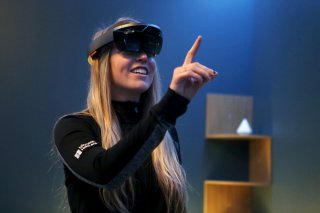 In June 2021, Microsoft announced that it would be providing its HoloLens headsets in “high-tech headsets” for Army soldiers. The announcement was the result of a two-year process that had included “a series of weeklong mini boot camps” for Microsoft engineers at a military base in North Carolina.

“Microsoft worked closely with the Army in an integrated team from the start to better understand its needs and goals for the project,” Microsoft said at the time in a blog post. “Soldiers came to Microsoft’s industrial design and software labs at the company’s Redmond, Washington, campus to test various prototypes and provide feedback, which was then used to develop the next version of the device.” The rollout was later delayed until 2022.

Now, there are reports of trouble with the devices.

That report found that more than 80 percent of soldiers who had expressed discomfort developed it after less than three hours.

The author of the report did add that the Army should “prioritize improvements” before the devices are deployed further.

The devices offer the Integrated Visual Augmentation System (IVAS), a “heads-up display” reminiscent of Hollywood movies such as “The Terminator” and “Iron Man.” The Army, per Bloomberg, will spend $21.9 billion on the project over a decade-long period if all options are exercised. The Army is scheduled to spend  $424.2 million in this fiscal year, which lawmakers will soon weigh in on.

“Our close collaboration with the Army has enabled us to quickly build” the devices, Microsoft said in a statement to Bloomberg. They are also working toward a way to “develop a transformational platform that will deliver enhanced soldier safety and effectiveness. We are moving forward with the production and delivery of the initial set.” Microsoft was not made aware of the Pentagon report in advance, the Bloomberg piece said.

Earlier this week, despite Microsoft having its own headset product, the company announced a collaboration with Meta, related to the company formerly known as Facebook’s new Meta Quest Pro device.

“This new partnership brings Microsoft’s popular productivity tools to Meta’s virtual reality devices, giving people even more flexibility in how they collaborate and get work done,” Meta said in their announcement earlier this week. Points of collaboration include “immersive meeting experiences” in Microsoft Teams, Microsoft Windows 365 for Meta Quest, as well as Teams/Workrooms integration, Meta Avatars in Teams, and more. All will roll out over the coming months, the companies said.