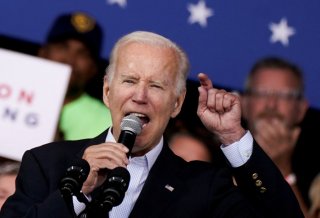 Last month, the United States passed the CHIPS and Science Act, one of the first pieces of national industrial policy—government planning and intervention in a specific industry—in the last fifty years, in this case for semiconductors. After the celebratory champagne has been drunk and the confetti floats to the ground, it’s helpful to put the CHIPS Act in context and understand the work that government and private capital have left to do.

The United States is now engaged in great power competition with China. It’s a contest over which nation’s diplomatic, information, military, and economic system will lead the world in the twenty-first century. And the result will determine whether we face a Chinese dystopian future or a democratic one where individuals and nations get to make their own choices. At the heart of this contest is leadership in emerging and disruptive technologies—running the gamut from semiconductors and supercomputers to biotech and blockchain, and everything in between.

Unlike the United States, China manages its industrial policy through top-down five-year plans. The overall goal is to turn China into a technologically advanced and militarily powerful state that can challenge U.S. commercial and military leadership. Beijing, unlike Washington, has embraced the idea that national security is inexorably intertwined with commercial technologies such as semiconductors, drones, and artificial intelligence (AI). China has developed what it calls military-civil fusion: a dual-use ecosystem built by tightly coupling its commercial technology companies with its defense ecosystem.

China has used its last three five-year plans to invest in critical technologies—including semiconductors, supercomputers, AI, machine learning, access to space, and biotechnology—making this effort a national priority. Moreover, Beijing has built a sophisticated public-private financing ecosystem to support these plans. This technology funding ecosystem includes regional investment funds, known in China as civil-military guidance funds, that exceed $700 billion. These are investment vehicles in which central and local government agencies make investments that are combined with private venture capital and state-owned enterprises in areas of strategic importance. Through these efforts, China is tightly coupling critical civilian companies to its defense ecosystem to help develop military weapons and strategic surprises.

The United States has nothing comparable. In contrast, for the last several decades, planning in the U.S. economy was left to “the market.” Driven by economic theory from the Chicago School of Economics, this premise is that free markets best allocate resources in an economy and that minimal, or even no, government intervention is best for economic prosperity. In a bipartisan experiment, the United States has run its economy on this theory for years. Optimizing profit above all else led to wholesale offshoring of manufacturing and entire industries in order to lower costs. Investors shifted to making massive investments in industries with the quickest and greatest returns without long-term capital investments—social media, e-commerce, and gaming, for instance—instead of in hardware, semiconductors, advanced manufacturing, transportation infrastructure, and other key industries. The result was that by default, private equity and venture capital were the de facto decision-makers of U.S. industrial policy.

With the demise of the Soviet Union and the rise of the United States as the sole superpower, this profits first strategy was “good enough,” as there was no other nation that could match America’s technical superiority. That changed while we weren’t paying attention.

In the first two decades of the twenty-first century, while the United States was focused on combating non-state actors, U.S. policymakers failed to understand China’s size, scale, ambition, and national commitment to surpassing the United States as the global leader in technology. Not just in “a” technology, but in all of those that are critical to both American national and economic security in this century.

China’s top-down national industrial policy means the United States is being out-planned, out-manned, and out-spent. By some estimates, China could be the leader in a number of critical technology areas sooner than typically thought. While Chinese investment in technology has been redundant and wasteful at times, the sum of these investments has resulted in a series of "strategic surprises" for the United States, including hypersonic weapons, “carrier killer” ballistic missiles, and fractional orbital bombardment systems, as well as rapid advances in space, semiconductors, supercomputers, and biotechnology.  More surprises seem likely, all of which will be driven by the goal of gaining commercial and military superiority over the United States.

However, America has advantages that China lacks, such as capital markets that can be incentivized rather than coerced, untapped innovation talent willing to help, labor markets that can be upskilled, and university and corporate research institutions that still excel. At the same time, a few cracks are showing in China’s march to technology supremacy. Beijing’s detention of some of China’s most successful entrepreneurs and investors, a crackdown on “superfluous” technologies like video games, and a slowdown of listings on China's version of NASDAQ, the Shanghai Stock Exchange’s STAR Market, may signal that the party is reining in its “anything goes” approach to pass the United States. Simultaneously, the U.S. Commerce Department has begun to prohibit the export of critical equipment and components that China has needed to build its tech ecosystem.

The Department of Defense’s traditional suppliers of defense tools, technologies, and weapons—the prime contractors and federal labs—are no longer the leaders in many of these emerging and disruptive technologies. And while the Department of Defense has world-class people and organizations, it’s designed for a world that no longer exists. The Pentagon’s inability to rapidly acquire and deploy commercial systems requires an organizational redesign on the scale of the Goldwater-Nichols Act, not just reform.

Depending on billionaires interested in defense is not a sustainable strategy, however, and venture capital invests in businesses that can become profitable in ten years or less. This means that technologies that might take decades to mature get caught up and die in a “valley of death.” Attempts to bridge this valley of death often find technology companies relying on government capital. These programs are limited in scope, time, and success at scale. Such government investment programs have largely failed to scale these emerging and disruptive technologies for three reasons.

Third, no private or government funds operate as “patient capital”—investing in critical deep technologies that may take more than a decade to mature and scale.

Today, one private capital fund is attempting to solve this problem. Gilman Louie, the founder of In-Q-Tel, has started America’s Frontier Fund (AFF.) This new fund will invest in key deep technologies to help the United States keep pace with the Chinese onslaught of capital focused on this area. AFF plans to raise one billion dollars in “patient private capital” from both public and private sources and to be entirely focused on identifying critical technologies and strategic investing. Setting up the fund as a non-profit allows for a focus on long-term investments for the country, not just what’s expedient to maximize profits. This will ensure these investments grow into large commercial and dual-use companies focused on the national interest.

AFF has an extraordinary team of experienced venture capitalists, a world-class chief scientist, and a startup incubation team. Importantly, this team comes with a unique and deep understanding of the intersection of national security and emerging and disruptive technologies.

AFF is the most promising effort I have seen in tackling head-on the long-term challenges of funding and scaling emerging and disruptive technologies.

At stake is whether the rest of the twenty-first century will be determined by an authoritarian government willing to impose a dystopian future on the world or free nations able to determine their own future.

These are tough problems to solve, and no single fund can’t take on the massive investments China is making. Nevertheless, it’s possible that the AFF’s market-driven approach, when combined with the government’s halting steps toward re-engaging in industrial policy, can tip the scale back in our favor.

Steve Blank is an Adjunct Professor at Stanford and co-founder of the Gordian Knot Center for National Security Innovation. He has been described as the Father of Modern Entrepreneurship. Credited with launching the Lean Startup movement and the curriculums for the National Science Foundation Innovation Corps and Hacking for Defense and Diplomacy, he’s the author of The Four Steps to the Epiphany and The Startup Owner’s Manual which revolutionized how startups were built.