Is the Samsung Galaxy Z Fold 4 Worth the Price? 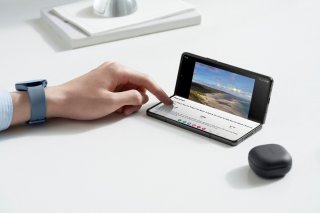 Earlier this month, Samsung officially unveiled the Galaxy Z Fold 4, its latest foldable smartphone. The company said that the phone “features an even wider screen, slimmer hinge, and lighter weight—providing the most comfortable one-handed use to date. Meanwhile, Z Flip4 is just as premium and compact—taking up half the size of a conventional smartphone when folded.”

Reviews of the new Samsung smartphone are largely positive. “With the Galaxy Z Fold 4, it feels like Samsung has slowed down to polish the blueprint it's been revising over the years. We’re talking sharper cameras with a longer zoom, better battery life, a renewed focus on multitasking and more. So while it might not look all that different, the Z Fold 4 feels like it’s five to 10 percent improved across practically every metric. Yeah, it’s still kind of bulky, and with a starting price of $1,800, it's way more expensive than a typical glass brick. But that’s the tax you pay for a cutting-edge device that’s actually ready for the mainstream,” Engadget said of the new phone.

The Verge described the Galaxy Z Fold 4 as “a little better and still too expensive,” compared to earlier versions of the Galaxy Z Fold. “Samsung, purveyor of the only serious foldables available on a global scale, is taking a victory lap with the Galaxy Fold 4. As is tradition, the company has announced full details after a parade of teases and leaks, confirming what we strongly suspected: it’s not a huge update,” that review said. “I can’t say it was noticeably slimmer or lighter than I expected, but the finish is fitting of a flagship device. It doesn’t feel prototype-y, either. It’s reassuringly solid, and I don’t feel like it needs to be handled with extra care. I’m a little nervous about how it will deal with the dusty environment that is the bottom of my purse, but there’s just one way to find out, so stay tuned.”

Tech Advisor also noted the high price. “The Samsung Galaxy Z Fold 4 is a refined foldable with improved durability, great performance and pixel-perfect cameras, but it doesn’t do much differently to its predecessor. Minor changes could attract if you were on the fence, but bigger upgrades from competing foldables leave the Z Fold 4 in the dust. It’s also still very expensive, with no price drop as in previous years… building foldable smartphones is hard – there’s a reason why Samsung is one of very few manufacturers doing so – and it’s great to see the company improving on its formula year-on-year. If you were on the fence about the Z Fold 3, the improvements from the 4 may be enough to push you into a foldable future – if you can stomach the asking price.”