Swarming to Victory: Drones and the Future of Great Power Competition 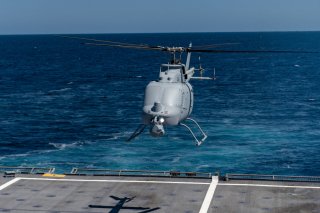 Force planners have long agonized over the tradeoff between high-intensity warfighting and low-intensity presence operations. However, new developments in autonomous technologies and uncrewed systems are transforming this longstanding dilemma into a false dichotomy. As mass becomes increasingly essential to the future battlefield, large drone fleets may be the solution to both warfighting and presence requirements, providing much-needed synergies under a tighter defense budget.

Preparing to fight and deter great power wars and maintaining a global military presence are two of the Department of Defense’s most important missions, but they bear competing requirements. While the former traditionally involves fewer and more advanced systems (i.e., capability, or “quality”) to overpower adversary forces, the latter necessitates greater numbers of platforms (i.e., capacity, or “quantity”) to “strike terrorists, train allies, contest disputed waters,” and address quotidian adversarial aggression. Achieving the ideal balance has always been a challenge, but it is especially problematic now as threats proliferate and the actual purchasing power of the U.S. defense budget declines.

This challenge has always been particularly acute in the Indo-Pacific, where China increasingly menaces U.S. allies and partners such as Taiwan—a threat that has only grown more conceivable and tangible in the wake of the Russian invasion of Ukraine, even if comparisons are often exaggerated. Due to China’s robust military modernization, the United States needs modern, lethal, and survivable wartime capabilities to persuade Chinese decisionmakers that a conventional war would be too costly. But a greater presence in the Indo-Pacific is also essential to prevent China from regularly using military and paramilitary tools below the threshold of armed conflict—such as ordering fighter sorties, building artificial islands, and harassing regional fishermen in contested waters—to gradually change the regional status quo. Therefore, both high-intensity warfighting capabilities and low-intensity presence operations are necessary to deter the entire spectrum of China’s aggressive behavior. And while the geostrategic environment in Eastern Europe is different from that of the Indo-Pacific—Europe is a land-dominant theater as opposed to a maritime-dominant theater, thereby affecting how Russia employs its conventional military and hybrid toolset—simultaneous capability and presence would also be very useful in Europe.

However, the United States has struggled to find an affordable solution to this tradeoff. One particularly salient testament to this failure was the Littoral Combat Ship (LCS). Originally designed to increase the United States’ naval presence through quantity, mobility, and modular mission packages, the ship was not sufficiently survivable against Chinese anti-ship ballistic and cruise missiles to provide a compelling warfighting threat. Therefore, while some of these ships were produced, LCS procurement was ultimately reduced by Secretary of Defense Ashton Carter, essentially resulting in the limited production of a lame-duck ship that was no longer numerous enough to bolster presence nor capable enough to deter great power conflict. Indeed, it was the worst of all worlds.

Fortunately, emerging technologies present a critical opportunity. Advances in autonomous systems portend a future battlefield where the Clausewitzian concept of mass will once again reign supreme. Drone swarms in particular can ameliorate the tradeoff between warfighting and presence by simultaneously meeting their respective requirements. In large quantities, autonomous systems are both: 1) an attritable capability that can survive and overwhelm Chinese and Russian platforms in wartime; and 2) a resource with sufficient capacity to ensure persistent presence in peacetime. For example, imagine autonomous systems that can more regularly monitor Chinese maritime aggression, execute freedom-of-navigation operations by buzzing and warning Chinese ships, and both provide intelligence and fight in a conventional war if necessary. These capabilities could be a strategic, operational, and budgetary game changer for the United States, and the Biden administration should encourage the widespread military adoption of drones through the following efforts.

First, as argued elsewhere, the Department of Defense needs to shift its acquisition mindset. For too long, the Pentagon’s primary business model for warfighting has been “competition by differentiation,” which prioritizes the procurement of expensive and sophisticated capabilities. This is no longer affordable and will never achieve both capability and presence simultaneously. Rather, the Pentagon will need to start “competing by cost” as well, acquiring cheaper drones to complement more sophisticated systems and thereby precipitating a high-low combination that can serve a variety of warfighting and presence functions. To deliver this high-low mix, defense officials must capably navigate an increasingly complex defense industrial landscape and partner with both traditional prime integrators and smaller, more agile tech firms.

Second, the Pentagon should prioritize and invest in the right autonomous capabilities. It should accelerate the development of multi-purpose aerial, maritime, and undersea drones, which should be capable of multiple mission sets, including intelligence, surveillance, and reconnaissance, as well as the deployment of kinetic payloads. These investments should be accompanied by updated operational concepts to foster greater human-machine teaming and facilitate human command and control over drone swarms, thereby enabling these drones to plug more easily into both low-intensity freedom-of-navigation operations for greater regional presence in the Indo-Pacific (and to some extent Europe) and high-intensity military operations for conventional wartime scenarios vis-à-vis China and Russia.

Lastly, the administration should reconsider traditional military and diplomatic messaging in order to effectively signal capability and resolve with a force increasingly composed of autonomous systems rather than human personnel. President Donald Trump set a precedent when he did not retaliate militarily against Iran after it shot down a U.S. surveillance drone in 2019. If the United States is to more heavily rely on autonomous systems, it needs to deliver and reinforce a more consistent message: attacks against U.S. drones can incur very grave consequences, up to and including escalation to crisis and even war. Drone casualties will never be as consequential as human casualties, but if drones are to have any deterrent effect through their presence alone, they need to be backed by greater implicit resolve.

Drones will be essential in the future of military competition and conflict, and the time to invest is now.

For more insights on the future of autonomy in national security and defense, you can join the May 17 NEXUS 22 symposium, featuring distinguished experts such as former Under Secretary of Defense for Policy Michèle Flournoy, investor Marc Andreessen, Defense Innovation Unit Director Mike Brown, and Rebellion Defense Chief Executive Officer Chris Lynch.

Christian Trotti is the Assistant Director of the Scowcroft Center for Strategy and Security at the Atlantic Council.