Treasury Zeroes in on Crypto as a Threat to Financial Stability 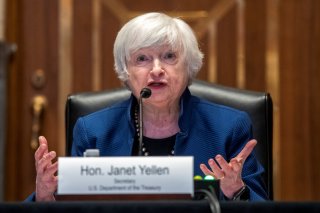 In a report released on Monday, the Treasury Department’s Financial Stability Oversight Council sounded the alarm that unregulated cryptocurrencies could pose major risks to the U.S. financial system, CNBC reported.

The council pinpointed digital or cryptocurrency assets like stablecoins, as well as lending and borrowing on the industry’s trading platforms, as an “important emerging vulnerability.”

“This report provides a strong foundation for policymakers as we work to mitigate the financial stability risks of digital assets while realizing the potential benefits of innovation,” Treasury Secretary Janet Yellen said in a statement.

“The report concludes that crypto-asset activities could pose risks to the stability of the U.S. financial system and emphasizes the importance of appropriate regulation, including enforcement of existing laws. It is vital that government stakeholders collectively work to make progress on these recommendations,” she continued.

According to the report, global crypto-asset market capitalization hit a peak of about $3 trillion last November—accounting for approximately 1 percent of financial assets worldwide. However, despite the relatively small size, the council found that digital financing is quickly gaining in popularity and is increasingly being manipulated by criminals.

“Crypto-asset prices appear to be primarily driven by speculation rather than grounded in current fundamental economic use cases, and prices have repeatedly recorded significant and broad declines. Many crypto-asset firms or activities have sizable interconnections with crypto-asset entities that have risky business profiles and opaque capital and liquidity positions,” the report wrote.

Although the report didn’t endorse any particular piece of legislation, Roll Call reported on Tuesday that if Republicans win control of Congress in the November midterm elections, experts are hinting that there might be more pressure on regulators to push forward crypto-friendly rules.

“Lawmakers from both parties have teamed up on legislation that would regulate the industry following a chaotic year with a stablecoin failure and the bankruptcies of crypto lending companies,” the news outlet wrote, noting that Bitcoin has shed more than 60 percent of its value since November 2021.

“Republicans, though, have been particularly zealous in wanting more clearly defined rules of the road from regulators. … [They] are also against the government fulfilling a role they see as the domain of the private sector, one example being a central bank digital currency issued by the Federal Reserve,” it continued.