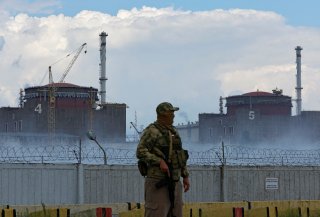 Ukraine’s state-run Energoatom energy company, which manages the country’s nuclear power plants, claimed on Tuesday that its website had been targeted by a Russian cyberattack for roughly three hours earlier in the day, although it denied that it had been affected by the incident.

“The Russian group ‘People’s Cyber Army’ carried out a cyber attack using 7.25 million bot users, who simulated hundreds of millions of views of the company’s main page,” the company claimed in a statement on its Telegram channel, alleging that the group had launched a “distributed denial of service,” or DDoS, attack. During a DDoS attack, networks of remotely-controlled computers called “botnets” repeatedly visit a specific website, hoping to overwhelm it with traffic and prevent authentic users from seeing it.

Energoatom claimed that the attack “did not significantly affect” the operations of the website and had no connection to the function of its facilities. Later in the day, the “popular cyberarmy” instructed its followers on Telegram to redirect their attacks toward the Ukrainian Institute of National Memory, a government institution created to preserve and document Ukrainian history. Some sources reported that the group’s website was slow afterward, although it appeared to have returned to full functionality by Wednesday morning.

The attacks against Energoatom came amid rising tensions near the Zaporizhzhia nuclear power plant, which the Ukrainian company oversees. Although Russian forces captured the plant early in the war, Energoatom employees have continued to operate it, and it has continued to power Ukrainian homes in the country’s southeast. In the past week, however, the plant was damaged by an artillery strike, leading local authorities and the International Atomic Energy Agency (IAEA) to warn that further damage to the reactor core or to the spent fuel storage area could lead to a catastrophic radiation leak.

Both Russian and Ukrainian forces deny targeting the plant and have accused the other side of launching the artillery strike.

Prior to the Russian invasion, Energoatom operated Ukraine’s four nuclear power stations in Khmelnytskyi, Rivne, Yuzhnoukrainsk, and Zaporizhzhia. The company also oversees cleanup and maintenance operations at the Chernobyl plant, which suffered a catastrophic meltdown in its fourth reactor in 1986 while Ukraine was a constituent republic within the Soviet Union. In the aftermath of the disaster, the fourth reactor was sealed, but the other three continued to operate for another decade, with the final reactor closing down in 2000.

Interest in the Chernobyl reactor was briefly renewed when Russian troops captured the site in the opening hours of the invasion—leading to fears that they could accidentally breach the containment zone around reactor four and release radiation once more. Although the site remained sealed, hundreds of Russian troops reportedly fell ill while traveling through Chernobyl after heavy vehicles drove through the “exclusion zone” surrounding the defunct reactor, kicking up radioactive dust. The site has since been reclaimed by Ukrainian forces.