Welcome to the Future: Augmented Reality Market Is Booming 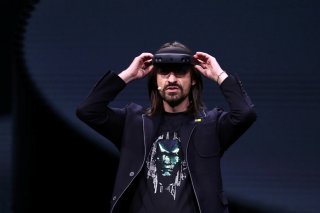 The market for augmented reality (AR) devices, until recently, was dominated mostly by the enterprise. But the consumer market is beginning to show up for it. That’s according to a new report from Strategy Analytics, “Has Consumer AR Finally Arrived? Market Triples From 2020-2021.”

Last year, per the report, Real grabbed 75 percent of the consumer AR market.

“Consumer shipments grew 161% YoY from 2020 to 2021. In the same period, growth in consumer AR revenues outpaced the overall market, growing over 300% YoY. There is a broad range of devices attempting to address the consumer AR market,” David MacQueen, executive director of Strategy Analytics, said in the release.

“However, none has achieved more than a single digit % share of shipments in 2020 or 2021, with one notable exception. It is newcomer Nreal which is driving the consumer AR market, having found the sweet spot for both price ($599) and functionality. A 75% market share of consumer AR shipments in 2021, rising to 81% in 1H 2022, demonstrates Nreal’s success.”

That company described its products as “one step to augmented reality,” and called its glasses a “portable home theater.”

“Step into your very own theater, without stepping out of your living room. With Nreal’s brand of AR glasses, you'll be stunned as a theater-sized screen is instantly projected right in front of you,” Nreal said about its products.

“Nreal has a lead over its competitors with its optical technology. Comparing the Nreal Light and Air against over 60 other devices in our Dedicated AR Device Specification Tracker, Nreal devices are in the top 16% of devices by display resolution, and rank in the top 20% device grouping for field of view (FoV),” MacQueen added.

“Nreal’s go-to-market strategy, in partnership with carriers, has been another key factor in building the company’s leadership position. The company now has a global reach with 8 carriers in 7 countries, across 3 continents.”

XR Today wrote this week about how Nreal “amplified” such soccer competitions as SuperCup 2022 and the English Premier League. The company, which started in China, also plans to return there for a big launch, PanDaily reported.

“The AR market has a high threshold. The IDC has said before that if a start-up wants to enter this market, it needs to provide customized services for the enterprise in the short term because it is difficult for consumers to spend thousands of dollars to buy a product with little by way of popular content,” that site reported. “This is one of the reasons why Nreal products have not yet appeared in China. Xu mentioned that the company had planned to enter the domestic market before, but it still hoped to improve the user experience before releasing their products.”