From “Casino” to “Dirty Dancing”: The Best of What’s Coming to Hulu in June 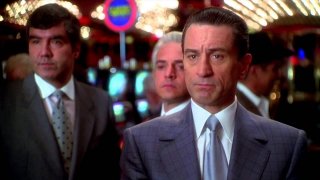 Ever since the quarantines began, Hulu has been on a huge roll. It’s debuted the “FX on Hulu” channel, which has included such acclaimed shows as “Mrs. America,” “Dave,” and “Devs,” and the platform has also had hits with the likes of “Normal People,” and movies like “Parasite “and “Portrait of a Lady on Fire.” The lockdowns may be starting to lift, but there’s still plenty to enjoy on the streaming service in June:

- “Casino” (June 1.) Martin Scorsese’s 1995 film, which turns 25 later this year, hits Hulu the first of the month. Enjoy the story of how the mob took over Las Vegas, as told by a huge cast led by Robert De Niro, Joe Pesci, Sharon Stone and James Woods.

- “Dave” (June 1.) You can get the entire first season of “Dave”—the hilarious series about rapper Dave “Lil Dickey” Burd—on Hulu already. But at the start of June, you can also enjoy the other “Dave” —the movie from 1993 about a presidential lookalike (Kevin Kline) who’s hired to impersonate the actual president. Once in the White House, he does some good, outsmarts the real president’s evil advisers, and even falls for the first lady (Sigourney Weaver.)

- “Dirty Dancing” (June 1.) One of the most beloved movies of the 1980s is set in the early 1960s, concerning the love affair between a young woman (Jennifer Grey) and a dance instructor (the late Patrick Swayze) at a Catskills resort. This classic from 1987 features great music and even better dancing.

- “Charlie Wilson’s War” (June 1.) Probably the best movie ever made about the clandestine Congressional appropriations process, 2007’s “Charlie Wilson’s War” stars Tom Hanks as the eponymous Texas Congressman, who in the early 1980s worked with a CIA veteran (Philip Seymour Hoffman) and a conservative socialite (Julia Roberts) to route funds to militants in Afghanistan who threw out the Soviets. The film, the final one directed by Mike Nichols, shows how this well-intentioned campaign had disastrous results.

- “Thelma and Louise” (June 1.) Ridley Scott’s 1993 film, starring Susan Sarandon and Geena Davis, was groundbreaking for its depiction of two women on the run as clandestine heroes, while also featuring an early performance by Brad Pitt.

- “The X-Files” (June 1.) All 11 seasons of the popular TV series, including the two recent revival seasons, have been on Hulu for a while, but on June 1 the serve adds the 1998 “X-Files” movie, the one featuring mysterious bees, and a giant spaceship at the South Pole. The movie was released between seasons of the show.

- “A Beautiful Day in the Neighborhood” (June 2.) If you’re the sort of person invested in Tom Hanks making you feel better about what’s going on the world, seek out director Marielle Heller’s 2019 film about Fred Rogers (Hanks) and his friendship with a cynical reporter (Matthew Rhys, as a stand-in for Tom Junod.)

- “Brockmire: Season 4” (June 16.) The IFC series, starring Hank Azaria as a disgraced baseball announcer on the comeback trail, finished off its four-year run earlier this month, with a bizarre, huge swing of a final season that was set in the future. In mid-June, the final season joins the rest of the show’s run on Hulu.

- “Out of Sight” (June 19.) One of the best adaptations ever of novelist Elmore Leonard’s work, along with “Get Shorty” and the TV series “Justified,” which is also on Hulu, 1998’s “Out of Sight” is a sexy, crackerjack thriller directed by Steven Soderbergh. The film, starring George Clooney as a thief and Jennifer Lopez as the U.S. marshal out to catch him, was a huge flop when it came out but has gained esteem over time.

- “Mission: Impossible-Ghost Protocol” (June 30.) There have been six “Mission: Impossible” films to date, over the course of nearly 25 years, and two more are on the way. But the best one of all is the fourth one, directed by Brad Bird, in which Tom Cruise climbs up the building in Dubai.