4K HDTV Showdown: Is OLED Worth the Extra Money Over QLED? 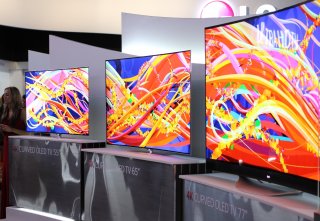 This is what we call walking the fine line between being price-conscious and getting the best quality. But there are so many great TV options out there on the market right now, and they are being manufactured by some of the world’s most reputable companies like Samsung, LG and Sony.

Since this is the case, let’s start at the top. Few people would argue that LG’s OLED offering shouldn’t be considered above all others. Even at first glance, you can see that the OLEDs boast impeccable design — sort of like the iPhones of today’s TV universe.

Part of the visual appeal is that OLEDs can be designed thinner than its QLED or LCD rivals, and that is accomplished by the technology behind OLED TVs. Unlike Samsung and others, OLED TVs utilize self-emissive pixels, jettisoning the need for backlighting and allowing for a much thinner design.

When electricity passes through these pixels, which number in the millions in these TVs, they light up in different colors. The other advantage is that there are no longer dark pixels being lit from behind. When OLED pixels can remain completely dark, the black color on your screen is 100 percent true.

OLED TVs also use additional white light to manufacture even more varied colors, which make for images that are more diverse, richer and more accurate. Moreover, OLED TVs are more environmentally friendly because they use less energy than their counterparts that depend on energy-guzzling backlighting.

LG, armed with this technology, can pretty much dictate how much it sells its OLED TVs for — and they don’t come cheap. You can easily fork over north of $2,000 on a 65- or a 75-inch model. Yes, you can save a few hundred dollars by going with a QLED or even an LCD TV, but in terms of picture quality, you’ll surely be missing out.

With OLED TVs, you do get what you pay for. Tests after tests have shown that OLED TVs offer inimitable image quality, nearly perfect black levels, precise colors, wide viewing angles and outstanding uniformity. For many who have already splurged on an OLED, there is no looking back for them. This is the only TV that they’ll put in their living rooms.

There are, however, two main downsides to OLEDs: burn-in and increased competition. The Achilles’ heel of OLED TVs has always been that they are susceptible to image retention or burn-in. If you do take the necessary precautionary steps, though, having to deal with this pesky issue is pretty rare.

Speaking of increased competition, LG is keeping a close eye on its Korean archrival Samsung, as the world’s biggest TV seller has committed $11 billion over the next five years to produce the groundbreaking QD-OLED hybrid TV that takes the best qualities of both OLED and QLED technology. It will indeed be interesting to see how this TV matches up with today’s OLED offerings.