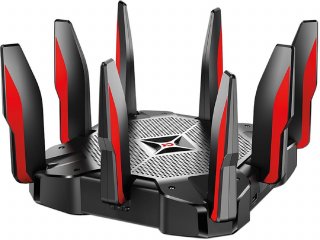 Wi-Fi is in a state of a flux like few other technologies. The latest specification, Wi-Fi 6, arrived in 2019, with the first router products featuring the technology rolling out this year, with the next step up, Wi-Fi 6E, also right around the corner.

In the meantime, according to the top tech sites’ ratings published in recent weeks, here are the top-rated individual wireless routers:

Tom Guide’s choice for the best router available is the Netgear Nighthawk AX8, which it called the “performance leader and best router overall.”

“With the Netgear Nighthawk AX8 (RAX80) Wi-Fi 6 router, top performance and enhanced security go hand in hand, combining throughput that smashes through the gigabit per second barrier with malware protection and Disney’s Circle app for blocking inappropriate content and managing family network use,” the site said of that Netgear router. “And with excellent performance through walls and floors, the Nighthawk AX8 will work just as well in the real world as in the lab.”

“The first gaming router we’ve tested that features Wi-Fi 6, the Asus ROG Rapture GT-AX11000 is a gamer’s delight, with speed that improves over longer range, low latency and all the features that gamers expect. Add it all up and most other gaming routers are now second best,” the site said.

TechRadar, on its own list, named the Google Nest Wi-Fi the best available Wi-fi router.

“The best router 2020 has given us takes the Google Wifi, gives it the capabilities of Google Home and wraps it all up in an even sleeker and more appealing package. It’s a mesh router and a smart speaker in one, all with the simplicity that Google Wifi is known for,” the site said.

“While it is among the more expensive options out there and limits you to two mesh routers, the Asus ZenWifi AX offers blazing fast speeds as well as plenty of flexibility in its setup—such as the option to set up one or two networks using the 2.4 and 5GHz bands. With excellent security features to boot, this is a fantastic choice if you’re looking at mesh routers,” the site said of that router.

CNET, meanwhile, chose the TP-Link Archer AX6000 as its pick for the Best Wi-Fi 6 router.

“If you’re looking to make the upgrade now, or if you need a new wireless router and you want something future-proofed for the next generation of devices, then go for the TP-Link Archer AX6000,” the site said. “It basically aced our performance tests, delivering the fastest top transfer speeds we’ve ever recorded, plus excellent range and low latency.”